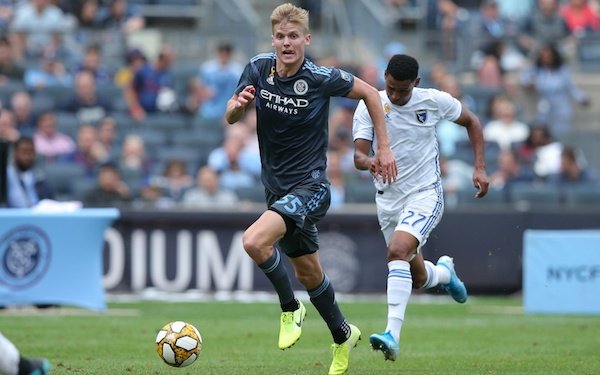 New York City FC took advantage of Philadelphia's 1-1 tie with LAFC and Atlanta United's surprise 3-1 loss to Columbus to pull away from its contenders in the Eastern Conference race with a 2-1 win over San Jose.

NYCFC finished second in 2016 and 2017 and third in 2018 but is looking for its first regular-season conference title in five years in MLS. It's 6-0-1 in its last seven games and 16-4-4 since starting out without a win in its first six games.

"At the moment, I can say that we are really tired," said NYCFC coach Dome Torrent. "We have five days to recover, to rest well, we will try, like I said after the last game, we will try to finish in the first position."

NYCFC plays at FC Dallas next Saturday, then closes against Atlanta United at Yankee United and New England and Philadelphia on the road.

Torrent said winning without Moralez was important for NYCFC's confidence.

"Everyone knows how important Maxi is for us," he said, "but everybody is important for us. I prefer to play with him, of course, but that does mean the team is growing up. It is better, right now it is getting better every single day."

One player who has been growing in stature is 22-year-old American Keaton Parks, who scored the first of NYCFC's two goals in three minutes against the Quakes.

“It is amazing," Torrent said of Parks' first MLS goal since he arrived on loan from Benfica. "He deserved it because he could have scored before that against Red Bulls, against New England."

Elsewhere ... Chicago kept its slim playoff hopes alive when it crushed FC Dallas, 4-0. The Fire moved ahead of Orlando City, which could only manage a 3-3 tie with the Revs.