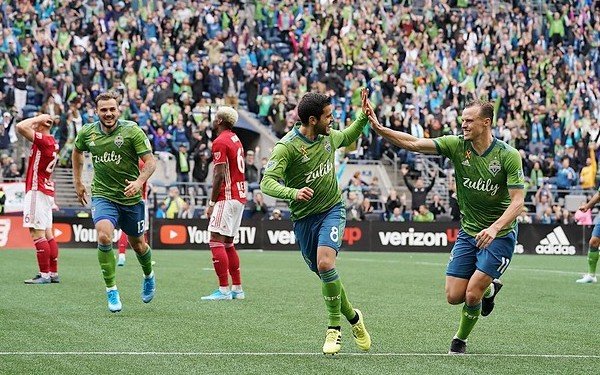 In response to the ejection of an Emerald City Supporters leader during halftime of Sunday's Sounders-Red Bulls match for continuing to display an Iron Front flag in the first half of the match in Seattle, most fans behind the goal at the south end of CenturyLink Field, known as The Brougham End, walked out at the beginning of the second half in a sign of unity.

The protest was the latest incident in MLS this season where fans have challenged the ban on the display of Iron Front flags or banners. It came just four days before MLS officials are slated to meet with the Independent Supporters Council and leaders of club supporters' groups to discuss the controversial ban.

Taylor Graham, the Sounders vice president of business operations and marketing and their point person for the ongoing dialogue with the Emerald City Supporters and other supporters groups, said Thursday's meeting will take place in Las Vegas, where the final of the new Leagues Cup will be played on Wednesday night.

“This is not something that is isolated in Seattle,” said Graham. “As much as we  can have good and productive and honest and direct and sometimes tough conversations with our supporters groups, it’s equally important that the league understands why this is such an important issue and why now of all these times.”

Portland's 107 Independent Supporters Trust have staged several protests, most notably a silent protest for the first 33 minutes of the Timbers' match against their archrival Sounders on Aug. 23. There have also been incidents in Atlanta and Minnesota.

After the Sounders' 4-2 win, head coach Brian Schmetzer, who goes back with the Sounders as a player to 1980 and whose family's soccer shop was critical to the growth of soccer in Seattle, said he understood the conflict and didn't want it to effect the performance of his team. The Sounders recovered from blowing a 2-0 lead to win on two late goals.

"This is an issue that I hope that both sides can find a solution," he said, "because I don’t like to see that end of the stadium empty. I think we have the greatest fans, the best fan support. Maybe not numerically because of Atlanta, but this club is the relationship between the fans and the players. I don’t want that to stop.”

The emblem of the Iron Front, an anti-Nazi paramilitary organization in Germany in the early 1930s, features three arrows pointing downward. Fans consider it an expression of anti-fascism and anti-racism.

MLS's new Fan Code of Conduct bans the display of political flags. The league's position is the Iron Front emblem is political because it has been co-opted by Antifa, the collection of militant protest groups opposed to fascism and other extreme right-wing ideology.

Supporters group want MLS to rescind the ban on flying the Iron Front flags and banners, remove the word “political” from its  Fan Code of Conduct and work with international experts on human rights to craft language in the Fan Code of Conduct that reflects and supports radical inclusion and anti-discrimination.

Graham, who spent six of his nine years as a player with the Sounders in the USL and then MLS, reiterated Schmetzer's desire to find a solution.

“This is a circumstance that is important to solve," he said, "because we want to be able to celebrate our values in a way that is consistent with what this league and what our club and what our fans believe in. But we have to find that solution.”