Alex Morgan out with knee injury for rest of NWSL season 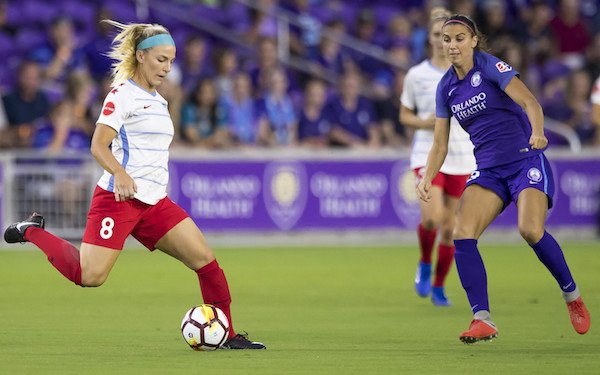 's season with the NWSL's Orlando Pride is over

The Pride announced on Monday that the U.S. national team star has been ruled out for the remainder of the 2019 season due to a patella stress reaction in her right knee.

Morgan injured knee at the Women's World Cup, where she nonetheless played every minute in the wins over France, England and the Netherlands for the USA, which won its second consecutive title.

The 30-year-old forward only played four games for the Pride before leaving to join the USA for its World Cup preparations. After returning from France, she was out six weeks before coming off the bench and playing 22 minutes against Utah. Four days later, she played 12 minutes at Chicago before leaving with on a concussion protocol.

Morgan has not played in any of the USA's three Victory Tour matches.

“It’s obviously difficult to lose a player of Alex’s caliber due to injury,” Orlando Pride general manager Erik Ustruck said. “However, after consulting with the club’s medical team at Orlando Health and U.S. Soccer, we felt it was in the best interest of Alex’s long-term health to shut her down for the season to focus on the rehabilitation process and take the appropriate time to recover from the lingering knee injury.”

The Pride has lost four games on a row to fall into last place in the NWSL with three games to play. Going back to the 2018 season, it has won just four of its last 27 matches.
nwsl, women's national team, women's world cup
6 comments about "Alex Morgan out with knee injury for rest of NWSL season".
Read more comments >
Next story loading