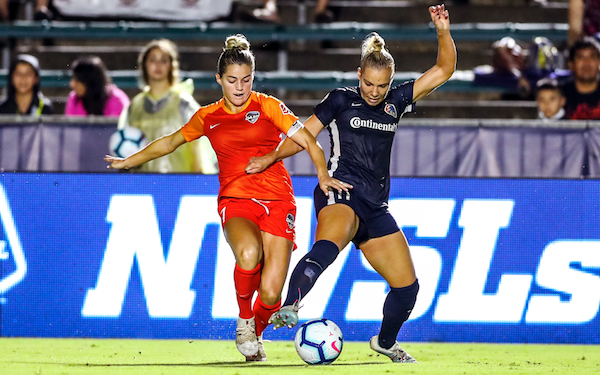 The North Carolina Courage became the first team to clinch a berth in the NWSL playoffs when it defeated the Houston Dash, 1-0, on a late goal by U.S. national team midfielder Samantha Mewis after a controversial penalty call.

Mewis’ first goal of the season lifted the Courage to its fifth straight win. It needs just three points in its final three games to clinch the NWSL Shield for the third consecutive season.

The Dash was four minutes away from shutting out the Courage, which had scored 12 goals in its two previous games, but was undone by a harsh penalty decision to rule Houston defender Kristie Mewis, Samantha's sister, brought down Crystal Dunn in the box.

Dash coach James Clarkson was furious with the decision of referee Thomas Snyder to not award a penalty kick when Sofia Huerta was pushed in the penalty area and then give the Courage its penalty.

“What I takeaway is that the standard of referee in this league isn’t good enough," Clarkson said. "That’s numerous times this season that it has cost us points. We get criticized that we haven’t performed at a certain level, but we come out tonight and put everything into the game. We should have had a clear penalty earlier in the second half and then the referee has gone on and done that and it’s disgraceful. I’ll get a letter in the week saying ‘we got it wrong’ but it has happened consistently – seven or eight times this year and it is not good enough."