I must return to the matter of aggressive goalkeeping. A number of recent incidents make it clear that slamming into an opponent, often making violent contact with his head, remains part of the goalkeeper’s repertoire. An important, trusted part, I would say. 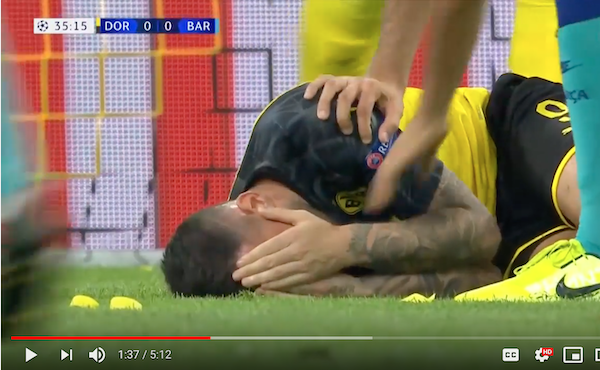 Obviously -- and I mean obviously -- that should not be the case. Violent assaults on opponents, which accurately defines these collisions, are not permitted by the sport’s rules. Yet goalkeepers, for reasons that no one can explain, are allowed to get away with them. I have yet to find anyone with an acceptable explanation of this and, believe me, I’ve asked a lot of people over the years, including goalkeepers and referees.

Consider what happened in Tuesday’s Champions League game between Borussia Dortmund and Barcelona. At the 35th minute, Barcelona was given a free kick out on the left flank, maybe 25 yards from the Dortmund goal line. Arthur Melo took the kick, swinging an aerial ball into the Dortmund penalty area. The ball was played, awkwardly, by a defender who headed it more or less straight up in the air. Dortmund goalkeeper Roman Burki, saw his opportunity and raced forward to punch away the dropping ball. There were two players, trying to head the ball, in his way. No problem. Burki simply flung himself at them and did manage to punch the ball away (though not very far) with his right hand.

But there was a problem. Burki plowed into one of the players, knocking him to the ground, and as he punched the ball, his elbow made hefty contact with the player’s head. The referee did not call a foul, but he did quickly signal for medical help and the game was held up for nearly 2 minutes as the player was treated on the field.

He then left the field, but quickly returned to the action. As this looked like a concussion issue, one is bound to wonder if the much-touted “concussion protocol” was applied. But that is not the point I want to make.

Suppose it were not the goalkeeper, but a defender, who decided to race into the fray and get his head on that dropping ball? To get to it, he would have to jump vigorously into the other two players, knocking at least one of them down. And we can further suppose that, in the act of jumping, he raised his arms and that his elbow made contact with a head.

I feel pretty confident that most referees would see that as a serious foul (“jumping at an opponent in a reckless manner” for starters) and award a penalty kick (maybe not every referee, giving penalty kicks does not come easy to some). Yet what the defender did was pretty well exactly what the goalkeeper did. And for which goalkeepers are rarely, if ever, penalized.

In the case cited, I am not criticizing the referee (the Romanian Ovidiu Hategan). He was faced with a tricky decision, because the player injured by goalkeeper Burki happened to be his Dortmund teammate, Paco Alcacer. Awarding a penalty kick when no Barcelona player was involved? I can’t see a ref doing that (even though I think it would have been justified).

So I’ll be content with the incident as an example of what goalkeepers do, and -- quite inexplicably -- are allowed to do. More than allowed to do -- they are praised for so doing. Here are three recent examples of goalkeeper violence greeted with acclaim by TV commentators.

MLS: Red Bulls-Colorado, Aug. 31 (19th minute). Colorado keeper Tim Howard races to the edge of his area to confront a Red Bull player who has broken through the Colorado defense. Howard simply blocks his process by standing in his way and, of course, knocking him down. No foul is called, but Howard is praised by TV guru Shep Messing (an ex-goalkeeper) for “making himself big.” 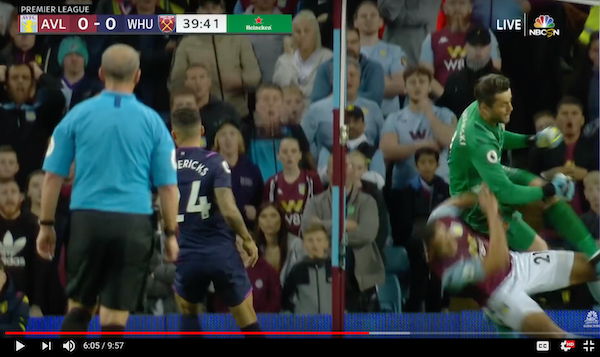 English Premier League: Chelsea-Sheffield United, Aug. 21 (19th minute). Chelsea scores as Sheffield goalkeeper Dean Henderson bobbles the ball. TV guru Tony Gale (an ex-defender) criticizes Henderson: “the goalkeeper has to be attacking that ball -- taking everything out of his way.”

EPL: Aston Villa-West Ham United, Sept. 16 (39th minute). As the ball is played long into the West Ham penalty area, Villa forward Anwar El Ghazi races to head it as West Ham goalkeeper races off his line to punch it away. The inevitable collision is violent and ugly. Fabianski stretches to punch the ball, also making solid contact with El Ghazi, who goes down. From the TV commentator: “Great goalkeeping by Fabianski!” From TV guru (ex-midfielder Leon Osman): “Fabianski knew he has to get there, knew he has to be brave and strong ... unfortunately for the Villa player, who’s come off all the worse for it.”

Thus the ingrained attitude in soccer is that it is praiseworthy for goalkeepers to knock opponents (and maybe teammates) out of the way, without any regard “to the danger to, or consequences for, an opponent.” The phrase is taken from the rulebook. And it’s not unusual to hear that line about it being “unfortunate” for the player who happens to be in the way.

This is evidently a deeply ingrained attitude, one that surely needs to be grained out as soon as possible.

FURTHER READING: Violent Goalkeeping: Players at risk as soccer ignores its own rules