Can U.S. Soccer find a path to equal pay from other nations and different sports? 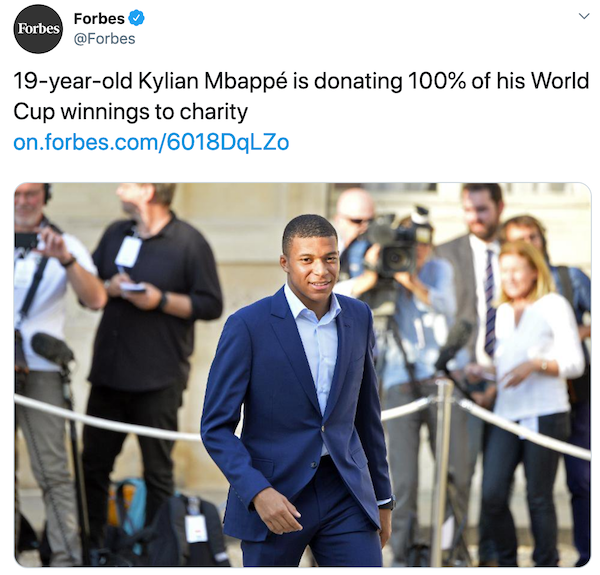 Cool, said England’s past and present players. But just so you know, we already do that.

(A story that Croatia’s team, surprise runners-up in 2018, would donate all of its prize money turned out to be concocted. But donated salaries aren’t unusual -- Alex Morgan and Megan Rapinoe are among those who have pledged to give 1% of their pay to a charity called Common Goal.)

But before you conclude that U.S. soccer players are overpaid, consider this: England’s men’s rugby players make 25,000 pounds ($31,238.88) per game, pending budget issues. They play roughly 10 games per year, so a frequently called player like Dan Cole, who has 89 caps over 10 years heading into the upcoming World Cup, can make more than $250,000 a year. His league has a salary cap of 7 million pounds ($8.75 million), but two players per team can be exempted. (Yes, MLS has company in the “designated player” department.)

That’s nice, but it’s not quite up to the salaries India pays its national team cricket players, several of who earn well more than $500,000 a year for national team play and some of whom make nearly $1 million. England’s cricketers can pass the 1 million pound ($1.25 million) threshold. Brazil’s men’s soccer players would earn money somewhere in that neighborhood -- if they won the World Cup, and their share of the FIFA bonus would be much higher than that of their European peers.

Closer to home, USA Basketball recently announced it would pay its core women’s players, winners of six consecutive championships in Olympic and World Cup play dating back to 2008, up to $100,000 for participating in training sessions between WNBA seasons.

And getting back to soccer, the much-heralded equal pay initiative in Norway means the men’s team and women’s team will each split a pot of 6 million kroner ($672,453). Nice, but that’s not a lot of money. Also, the bonuses for the World Cup are based on 25% of FIFA prize money, which means the men would still make much more than the women.

So when we’re trying to evaluate whether U.S. men and women in soccer earn comparable pay to their overseas counterparts, the answer is that it’s complicated.

Comparisons with professional sports leagues, a major part of a current lawsuit against the UFC and something the MLS Players Association will surely hit home in its current collective bargaining talks, fall flat for national teams because U.S. Soccer’s mission -- whether it excels at it or not -- is to grow the game from the bottom up, not the top down.

And some of these deals are vestigial. The U.S. men got serious about money in the short 1995 strike, a time in which many of them weren’t making significant money elsewhere. The women’s Victory Tour grew out of a dispute over what to do with a team that had just captured the American mainstream imagination by winning the 1999 World Cup.

Getting rid of some of the vestiges can help grow the game. The U.S. women have shortened the Victory Tour. Maybe it’s no coincidence that the NWSL, not quite as overshadowed by a bunch of autograph sessions/friendlies this time around, is holding on to its post-World Cup boom in a way that makes us jaded journalists take notice.

For U.S. women’s soccer, the closest analogue is probably their own counterparts in basketball. The soccer team’s salaries mean players don’t have to jump to Australia’s W-League in the NWSL offseason to make a few extra dollars. With the new camp money, the top U.S. basketball players won’t be traveling in the WNBA offseason to make ends meet.

It’s a substantial investment for USA Basketball, whose budget is a fraction of U.S. Soccer’s. The federation claimed total revenue of $10.9 million in the fiscal year ending Sept. 30, 2017. The preceding year, which included the Olympics, drew $22.7 million, which is still nearly the same as the Milwaukee Bucks pay Brook Lopez, who had a horrible showing as the U.S. men placed seventh in the recent World Cup. (The issue of whether to pay the U.S. men’s basketball team was a minor controversy a few years ago.)

U.S. men’s soccer has no easy analogue. The days of players making most of their money from the national team are long past. The youngest players getting called up for recent friendlies have salaries in the $100,000 range, but those will rise as they either stay in MLS or move overseas. Only a couple of the players on the roster when the USA failed to qualify for the 2018 World Cup make less than $500,000 from their clubs.

Sure, that’s still not Premier League money, which makes it rather easy for English players to hand over their small FA paychecks. But any U.S. player who can count on being called in to the next big game isn’t depending on that check to make the rent.

So what’s fair? Should national team pay be based on how much their players need it? Will soccer federations, like USA Basketball, eventually struggle to lure their best players to competitions in which they risk injuries that could cost them a fortune in the long run? And what are the obligations of a federation charged with taking care not only of current national team players but any potential future players as well?

The easiest route to equal pay would be the one suggested at the end of the Rush song The Trees: “And the trees are all kept equal by hatchet, axe and saw.” Just cut the men’s pay to equal the women’s pay, and voila -- equal pay! U.S. Soccer could make this point and argue that other federations tend to pay players according to their needs and the importance of national-team play -- slim to none in basketball, not much for English players who already have a fortune, quite a bit for cricket players who are constantly on international duty.

But that hardly seems fair. Players surely have a reasonable expectation to be compensated as their predecessors have. And as the U.S. men continue to negotiate a replacement for a long-expired collective bargaining agreement, they shouldn’t be punished for progressing to the point of making a decent living in the professional game.