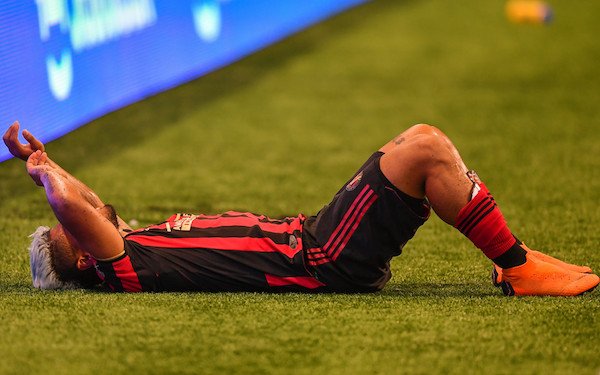 Atlanta United's 3-1 win over San Jose on Saturday thanks to a pair of late goals from Emerson Hyndman and Pity Martinez clinched a top four spot in the Eastern Conference, guaranteeing at least one home match at Mercedes-Benz Stadium for the 2019 MLS playoffs.

But just what kind of shape the Five Stripes will enter the playoffs was cast into doubt when 2018 MLS MVP Josef Martinez was injured in the second half.

Atlanta coach Frank de Boer did not have an update on the injury immediately after the game, but he acknowledged that it did not look good that Martinez would ask to leave a game -- especially a game with his 15-game scoring streak on line.

“We know Joseph," said de Boer. "He’s a tough guy. He will not step suddenly off the field. So he will have something, that’s for sure, but we have to wait. You know, it’s too early to predict, but I think it’s not a good sign that he goes off, and [misses the chance] to make the 16 in a row."

At 15 games, Martinez's scoring streak is an MLS record and ranks fifth all-time in the history of men's club soccer.

“People have stepped in and played big roles and performances," said Hyndman, himself a replacement for Ezequiel Barco. "Obviously, Brandon came in and did really well. I was happy for him, and he got an assist today. I thought he really could have had a goal. We are going to need everyone in this  push, especially when the playoffs come around. Obviously, Josef is a huge part of the way we play, scores tons of goals for us, but we need everyone.”

Martinez has scored 76 goals in 82 regular-season games and added four goals in six playoff games, including the first goal in Atlanta United's 2-0 win over Portland in MLS Cup 2018.

“Who’s going to score? That’s the biggest thing," said Darlington Nagbe of Martinez's absence. "He does most of our scoring, but it’s not just that. He frees up the game for us with his runs that he makes, again behind lines. Having him off the field was just a little bit more tension than normal, but hopefully, he’s okay."