Professional sports teams are obliged to see failure as unacceptable. This was easier in the pre-digital age, when defeat could be met with silence. Losing players and coaches were under no obligation to talk to the media, and there was no 24-hour spotlight on what players were doing either inside or outside of the club.

Nowadays, though, every single club must have its own small army of social media managers, required to justify their existence by providing an endless stream of content no matter what happened out on the field. That's easy enough when you're winning. But what happens when your team's on a losing streak, or has been eliminated from playoff contention weeks before the season's over?

This week's column looks at the brave efforts of Instagram account managers at struggling teams to bypass failure and talk up some positives. Head of Social Media at FC Startup may sound like the dream job for a sports-obsessed communications professional, but wait until you have to conjure up some upbeat content after that 4-0 home loss to Real Salt Lake. There's only so many times you can type, "Heads up, boys!" beneath a picture of exhausted, melancholy players weeping into the turf at the final whistle. Let the following serve as a guide to staying on-message, even when the subtext of that message is: "We suck!"

Vancouver Whitecaps (bottom of Western Conference, eliminated from playoff contention): If the team's a bust, concentrate on giveaways, 12 whole days of them (should see them through to the end of a curtailed season). Show a fan with a clenched fist holding a beer with the caption, "Never say die!" Hell, yeah -- the perfect combo of beer and blind optimism! Put out very generalized, corporate-influenced quotes that show the team is looking to the long term, for example, "We need to continue believing in the process" (Fredy Montero, future management consultant). We all know Fredy spontaneously uttered that as, by sheer coincidence, a digital communications executive was passing him in the locker room.

Sporting Kansas City (Western Conference, 11th.): "BOOM! Super Gerso gives us an early lead!" appeared on the feed during Saturday's home game against the Rapids. That was it for the rest of the night. Nothing about the Rapids' own goal scored by Tommy Smith that put Sporting 2-0 up. And definitely nothing about the three goals that turned the game in the visitors' favor ("BUST! Vengeful Smith gives Rapids a late lead!" was deleted by the intern's boss before they could press the button). I endorse this silent option. When my team loses, I tend to ignore the game reports and match highlights. As our moms always used to tell us, "If you can't say something nice, then don't say anything at all." (They should put that quote at the top of Twitter's home page.)

Houston Dynamo (Western Conference, 10th.): Instead of engaging in transparent cheerleading you can follow the Dynamo's example of presenting yourself as an old-fashioned, newswire-style, pure information service. After losing at the equally bereft Vancouver Whitecaps earlier this month, Houston's media team posted an image of the game stats with the determinedly factual caption: "Final stats from the match played between the Houston Dynamo and Vancouver Whitecaps in Vancouver, British Columbia, on Saturday September 14, 2019." Forgot only to mention the zip code, the time zone, and that the game was played in 2019 AD. 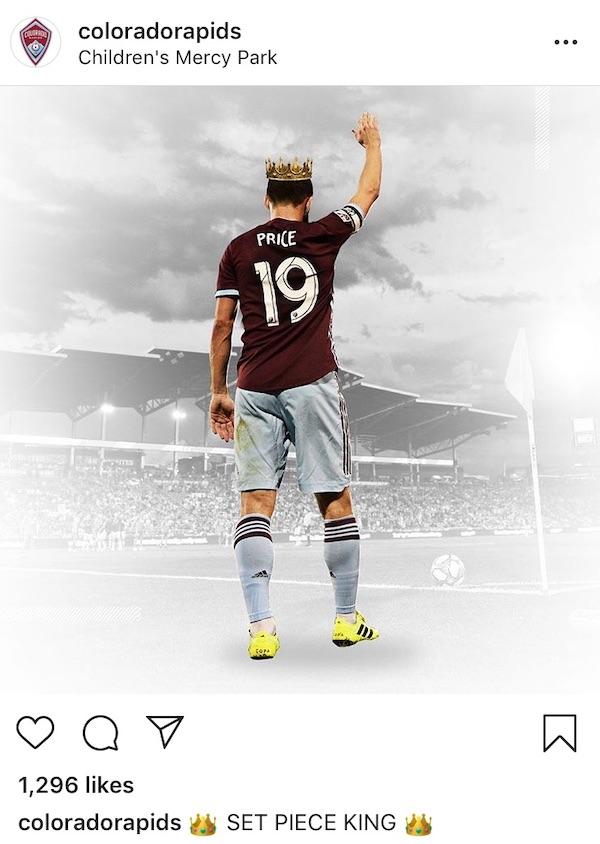 Colorado Rapids (Western Conference, 9th.): English midfielder Jack Price is pictured on the Rapids' Instagram account waving to the crowd with a crown super-imposed on his head, captioned "SET PIECE KING". This is an excellent policy. Just as toddlers on rec teams will be rewarded with juice-boxes and participation medals, and be assured by their parents that they won when they didn't, so Rapids players can be given old world aristocratic titles to keep their spirits up. Also up for grabs: the Count of the Corner Kick; the Baron of the Box; the PK Prince; the Earl of the Air; the Marquis of Marking; the Viscount of Vacuity (oh, hang on, that's for the social media manager).

Orlando Pride (bottom of the NWSL). "Tough one tonight" is the caption to an action photo from a 1-0 home loss against the Chicago Red Stars. There's a video clip of the team's sole goal in the 3-1 away loss to Reign FC. Otherwise, you wouldn't know from the Pride's Instagram account that the team's at the foot of the league -- there are several team pictures where everyone's smiling (nothing wrong with that) and a glut of posts signaling awareness of various social issues (nothing wrong with that either). There's something less fake about this approach. While down-playing the reality of their league position, the Pride's also saying: maybe - compared with our position in the community -- it's not so important anyway.

I realize that the point of social media is less about providing useful information, and more about showing presence, muscling in on the market, and supplying non-stop images with inane captions to a generation of fans who fret at any perceived digital silence. For grizzled, creaking observers like me, though, it's like searching for meaning in a vat of peanut M&Ms. To save you the bother in the comments section, my soccer-mad, Instagram-active 21-year-old daughter will now read this column and message me, "Typical middle-aged man's view. #irrelevantoldfart #hackoutoftime."