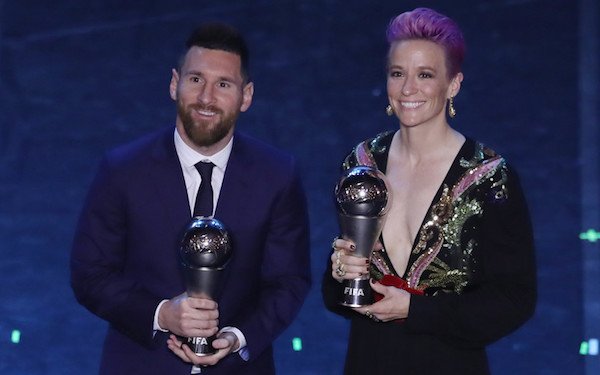 Megan Rapinoe, who was instrumental in leading the USA to its second straight Women's World Cup, won the award as the Best FIFA Women's Player of 2019, beating out teammate Alex Morgan, and said other athletes need to follow her lead in using their platform to promote change.

“I ask everyone here, lend your platform to other people, share your success," said Rapinoe at the FIFA awards ceremony in Milan. "We have a unique opportunity to use this game to actually change the world for the better. I hope you take that to heart, do something, we have incredible power in this room."

Rapinoe is the fourth American to win the FIFA's women's award after Mia Hamm in 2001 and 2002, Abby Wambach in 2012 and Carli Lloyd in 2015 and 2016. She used her speech to call out racism and homophobia in soccer and pay inequality.

“Some of the stories that inspired me this year, Raheem Sterling and [Kalidou] Koulibaly, their incredible performance on the field and their reaction to the disgusting racism they have to take," she said. “If we really want to have meaningful change, if everyone other than Sterling or Koulibaly was outraged, if everyone was outraged by the homophobia. We have such an incredible opportunity being professional footballers, so much success, an incredible platform."

Sterling and Koulibaly were the targets of racial abuse in the last year. Koulibaly plays for Napoli in Italy, where there have been repeated incidents of racist chants aimed at players of color and soccer authorities have downplayed them. On Sunday, FIFA president Gianni Infantino called out the recent episodes of racism in Italian soccer as unacceptable.

“Gianni was stealing a little bit of my thunder," said Rapinoe. "All of a sudden he’s a social activist. [He talked] about a lot of the issues, which is amazing. I think we as a team and me personally are pushing Gianni to be more involved, and everyone in that room.” 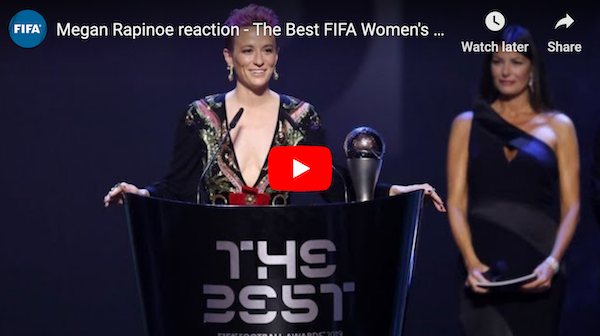 Rapinoe said she was also inspired by others.

“The young Iranian woman [Sahar Khodayari] who eventually set herself on fire because she wasn't able to go to the game," she added. "The one out MLS player [Collin] Martin and the countless other female out LGBTQ players who fight so hard every day to a) just play the sport they love but b) to fight the rampant homophobia that we have."

Rapinoe was vocal during the recent World Cup to call out the pay inequality in soccer, the subject of an ongoing lawsuit between women's national team players and U.S. Soccer, and the second-class treatment of women's soccer.

For the first time, the women's awards followed the men's awards -- Lionel Messi was named Player of the Year and Jurgen Klopp won the Coach of the Year -- a move that was not overlooked by Rapinoe.

“Those are little subtle nods but those mean a lot when in past awards shows we haven’t even been here or been represented,” she said. “At certain times, if the men’s World Cup is on, we probably shouldn’t go last and that’s OK. I think catering to both in a way that elevates each sport when it’s at its highest is really special.”

Infantino has called for greater investment in women's soccer -- doubling the amount FIFA spends over the next four years to $1 billion -- though Rapinoe says that doesn't tell the proper story.

“Yeah, I’m not happy yet," she said, but I do feel like things are changing, for sure. With the doubling of the prize money, the gap actually grew between this World Cup and the last World Cup. ‘Double’ sounds fancy and nice but we need a little bit more structure around the way that we are increasing things. A lot of eyes were opened up this summer to the potential of the women’s game.”

women's national team, women's world cup
10 comments about "Best FIFA Player of the Year Megan Rapinoe calls on others to use platform for change".
Read more comments >
Next story loading