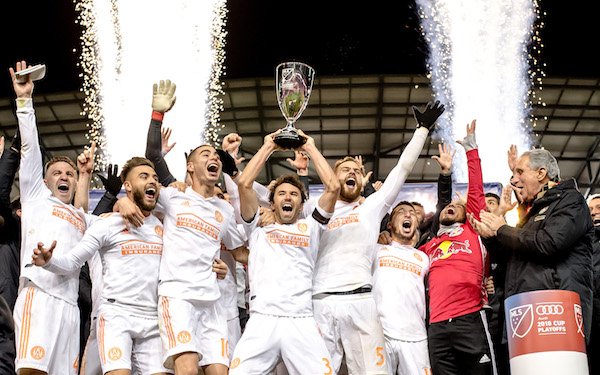 Atlanta United defender Michael Parkhurst has announced that he will retire at end of the 2019 season.

The 35-year-old American captained Atlanta United in 2018 when it won MLS Cup. It was his fifth trip to the MLS final and his first championship after losses with New England (2005-07) and Columbus (2015).

He has played 15 seasons, 10 in MLS with the Revs, Crew and Atlanta and five in Europe with FC Nordsjælland (Denmark) and Augsburg (Germany).

He started 70 games his first two seasons with Atlanta United but just 14 in 2019 as Miles Robinson has taken over as one of the starting center backs.

Parkhurst named MLS Rookie of the Year in 2005 and Defender of the Year in 2007 with the Revs. He was a six-time MLS All-Star and MLS Best XI selection in 2007. He joined Atlanta United in a trade with Columbus ahead of its first MLS season.

U.S. career. Parkhurst was capped 25 times by the USA and won the Gold Cup match in 2007. He was also a member of the squad that won the 2013 Gold Cup. He was selected to the 2008 U.S. Olympic Team as an overage selection.

He will join fellow Americans Nick Rimando, Tim Howard and DaMarcus Beasley in retiring at the end of the 2019 MLS season.