MLS: What's at stake on Wednesday 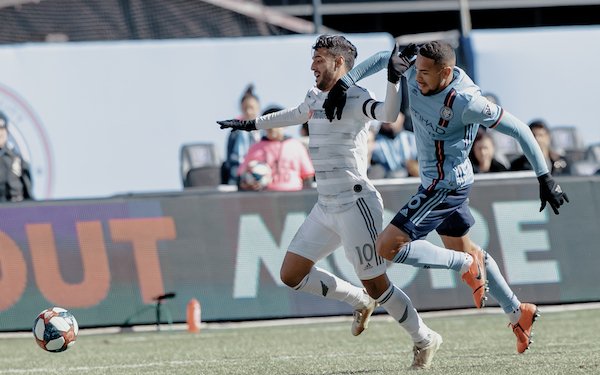 Both the MLS Supporters' Shield and first place in the Eastern Conference could decided on Wednesday night. Four different teams will have a shot at clinching a playoff berth, while six different teams could be eliminated from postseason contention.

NYCFC (58 points) vs. Atlanta United (54 points) 7 pm ET.
NYCFC could be up late to see if it has clinched the Eastern Conference title and a berth in the 2020 Concacaf Champions League. It will eliminate Atlanta United from the race with a victory but will then have to wait and see if Philadelphia fails to beat San Jose later in the evening in order to seal the deal.

Minnesota United (49 points) vs. Sporting KC (37 points) 8 pm ET.
The simple scenario that will set off the loudest rendition of “Wonderwall” St. Paul has ever heard: The Loons will clinch their first playoff berth with a win. (Portland and San Jose won't both be able to overtake the Loons since Portland and San Jose play each other on the final day of the season.) There are other possibilities of clinching on Wednesday, but that would spoil the party at Allianz Field.

Real Salt Lake (47 points) vs. LA Galaxy (48 points) 9:30 pm ET.
Right now, RSL and the Galaxy are fighting it out for fourth place in the Western Conference and home-field advantage in the quarterfinals. RSL can clinch a playoff berth with a win and some help in Portland and San Jose. The Galaxy only needs to win to clinch. It can also clinch with a tie and help elsewhere.

LAFC (65 points) vs. Houston (37 points) 10:30 pm ET.
LAFC can clinch the Supporters' Shield before it takes to the field. NYCFC needs to beat Atlanta United to keep its slim hopes alive. Otherwise, LAFC will clinch with a win over the Dynamo. (It won't be the first time LAFC has had a chance to clinch. It is riding a five-game winless streak that has reduced its lead over NYCFC to seven points.)

Portland (44 points) vs. New England (41 points) 10:30 pm ET.
The Timbers begin the evening in eighth place, behind the Quakes on the third tiebreaker (goals scored). The Revs sit in seventh place with a game in hand they'll want to take advantage of to pad their three-point lead over Chicago in eighth place.

San Jose (44 points) vs. Philadelphia (52 points) 11 pm ET.
The Quakes return home after a three-game road swing during which they lost all three games and dropped to seventh place. The Union, which has clinched a playoff berth, will be assured of hosting in the quarterfinals with a victory over the Quakes.

Six teams retain slim playoff hopes that could be extinguished by the end of the evening:

Only Houston and Sporting KC play on Wednesday night though wins won't necessarily be enough to save them from elimination.