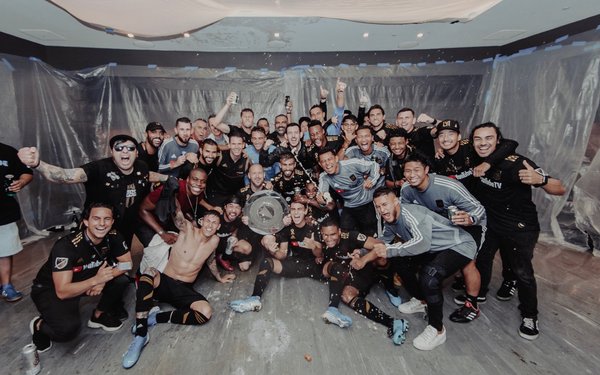 A dramatic Wednesday night of MLS action ended with the following:

-- LAFC clinched the MLS Supporters' Shield with a 3-1 win over Houston, becoming the first expansion team to clinch the title in only its second season. LAFC, which has 68 points in 32, games will break the league record of 71 points in a season set by the New York Red Bulls with four points in its last two games.

-- Minnesota clinched a playoff berth for the first time when it beat Sporting KC, 2-1, on rookie Hassani Dotson's deflected goal in the 90th minute.

-- LA Galaxy will return to the MLS playoffs after a two-year absence thanks to its 2-1 win at Real Salt Lake.

-- Idle Seattle also clinched a berth in the playoffs, setting a new league record for successive appearances in the playoffs with 11, surpassing the 10-year run by the Galaxy 1996-2005.

The Sounders clinched a berth when Portland and San Jose dropped points at home in dramatic finishes.

The Timbers blew a 2-0 lead at home against New England and had to settle for a 2-2 tie on goals by Gustavo Bou scored in the 87th minute and a penalty kick by Carles Gil in the seventh minute of stoppage time.

In San Jose, the Quakes led Philadelphia, 1-0, but had a second goal called up and then dropped a 2-1 decision on two goals in the last 20 minutes. (The Union's win moved it back into second place in the Eastern Conference ahead of Atlanta United.)

The point was good enough to move the Timbers into sixth place, ahead of FC Dallas on the first tiebreaker (total wins) and one point ahead of the Quakes, but they could have moved into fifth place ahead of RSL if they had held on to the 2-0 lead. Portland finished its 10-game homestand with a 4-4-2 record, dropping 16 points.