The misuse of VAR, the sins of goalkeepers ... and a big thank you to Lee Dixon

From the English Premier League comes more evidence that VAR -- a tool of undoubted value -- is being seriously misused.

Once again, the miserly NO GOAL sign flashed from the stadium screens, the mark -- by now almost the trademark -- of VAR at work. Leicester, Tottenham and Chelsea thought they had scored goals that were then denied by VAR decisions. 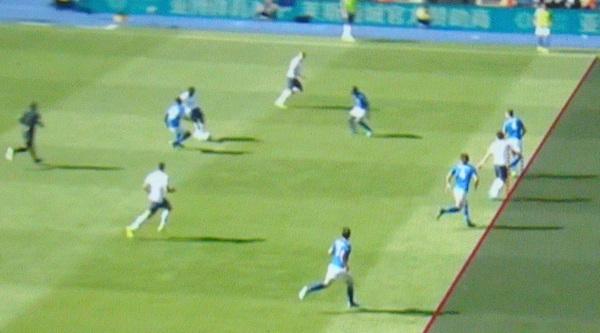 All three verdicts resulted from offside infractions that VAR had detected, but that the referee had not. In the first incident, the canceling of Wilfried Ndidi’s goal for Leicester, VAR got it right. But the other two - ruling out a Serge Aurier goal for Tottenham, and a Cesar Azpilicueta goal for Chelsea were absurdly marginal.

In both cases the player offside was not the player who scored the goal. The alleged offside occurred in the buildup, and involved Son Heung-min of Spurs, and Mason Mount of Chelsea.

These were very close calls. The VAR replays show Mount with one foot offside. But with Son, the call is literally millimetric, absurdly so, and quite probably just wrong. Anyway, these are two calls that should not have been made. The human eyes of the referee and his assistant could not spot them. In neither case was there any sign of opposing players appealing for offside. Evidently, there was nothing “clear and obvious” to be seen.

(As for player protests: for the moment, the lack of such protests is a good way of determining that the offense was minimal or non-existent. Alas, once defenders realize (which they quickly will) that their silence works against them, they will start protesting at every opportunity).

All else being equal, both Spurs and Chelsea should have tied their games 2-2, not lost 2-1. Of course, we have no way of knowing what difference those “lost” goals would have made to the final scoreline. But it does seem likely that the VAR procedure -- which intervenes after an apparently legitimate goal has been scored -- and celebrated -- might well have a more damaging effect on team morale than an immediate on-field offside call. Chelsea coach Frank Lampard chose the right word when he remarked that his team were “deflated” by VAR’s NO GOAL decision.

I do not believe that VAR is either needed or wanted where these hairline calls occur. It is being used in situations where it should not be used. Bad enough - but worse, much worse, is the opposite case, where VAR is not being used where it is very much needed.

As it happened, it was again Chelsea that suffered from VAR’s mis-use, or in this case non-use. Just two minutes after Azpilicueta’s goal had been nixed by VAR, Liverpool charged to the other end of the field and scored to make the game 2-0 in their favor. Chelsea’s discomfort was not over. Five minutes later, Chelsea should have had a penalty kick. Referee Michael Oliver did not give it for reasons that will be familiar to readers of this column.

This is what happened. Chelsea’s Jorginho swung a 30-yard ball into the Liverpool penalty area, intended for the head of the 6-foot-3 Tammy Abraham. The ball never got to Abraham as Liverpool goalkeeper Adrian charged forward to grab it. He did so ... but only by crashing violently into Abraham. Adrian, leading with his right knee (raised so high that it was at the level of Abraham’s head) jumped into Abraham and knocked him down.

Referee Oliver saw nothing wrong with any of that and did not whistle for a foul. He did, rather nonchalantly, wave Chelsea’s physios on to the field. Abraham, by turning away from the charging Adrian, had managed to get his head out of the way of Adrian’s knee, but had received a violent blow to his shoulder.

By any reading of the sport’s rules that I can think of, that was a violent foul by Adrian, and therefore a penalty kick to Chelsea. How could referee Oliver miss that? Of course, Oliver didn’t miss it. He saw it. He’s seen plenty of similar plays, and has ignored all of them. That’s what he has learned -- or has been taught -- to do. It’s OK for goal keepers to violently assault opponents.

That is the view that is widely accepted in soccer. But it is obviously wrong, dangerously wrong. Why is it that no one protests? Is there not a single referee somewhere willing to speak up and protest that, by not making these calls, referees are almost inviting serious injuries? There is a great opportunity here for VAR to make the calls -- an opportunity that is not being used.

Within the policy of omerta that surrounds goalkeeper violence, I could also include the army of television commentators. The NBC telecast featured the usual crew -- play-by-play man Arlo White, plus analysts Lee Dixon and Graeme Le Saux, former players, both defenders.

But this time, things were different. Maybe, just maybe, things are changing. Maybe the light is beginning to break through. In the exchange between these three experienced TV guys, there was Dixon insisting this was a foul, with both he and Le Saux stating that goalkeepers “get away” with things.

This is the first time I’ve heard a straightforward discussion of such matters on television. It’s worth pondering. This is my edited version of it (all non-goalkeeper stuff taken out). 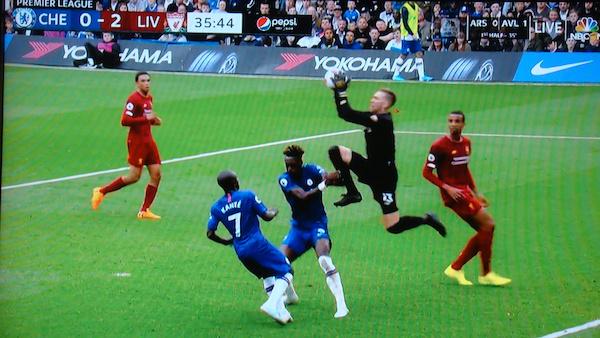 35:10 (score is 0-2). Jorginho (Chelsea) swings 30-yard ball into the Liverpool penalty area toward Chelsea forward Abraham. Liverpool goalkeeper Adrian charges off his line to grab the ball, which he does. He also smashes violently into Abraham.

WHITE: Abraham can’t get there before Adrian. [White does not mention the collision] Abraham stays down.

DIXON: Yeah, his foot was up, Adrian’s, wasn’t it? Coming out, to protect himself, often the goalkeeper will leave his foot up there. ... if a [field] player did that -- jumped to head the ball and stuck the foot up ... the referee would give a free kick”

Goalkeepers get away with stuff, don’t they?

Just watch him coming out -- foot comes up, knee in the back of the head ...

WHITE: That’s done in self-preservation though, isn’t it?

DIXON: They do it to protect themselves, but they injure people. I’ve known enough goalkeepers who tell you in training [that] they come out to protect themselves, but also to hit somebody ... so be it, that’s just the way it is. Because it’s a specialized position ... they put their hands up to get the ball and they drop it, they get a free kick -- because they say he shouldn’t really drop it, he must have been fouled  .. but a lot of the time they’re not.

DIXON: I’m not letting this go ... I think that’s a foul. If that’s a centerback comes to head it -- and follows through with his knee that high up and hits him in the back of the head ...

WHITE: Care to add anything Graeme?

LE SAUX: Well, technically it’s endangering an opponent isn’t it? But you’re never going to see a referee give a decision for that ... it’s an accepted part of the game ... a specialized position, they get away with different behavior, goalkeepers.

Just about everything that’s wrong with current goalkeeper behavior is in that exchange: Injuring players, special treatment from referees, dangerous fouling that is accepted by everyone. The exchange finishes with laughter. That, too, is usual. Making fun of goalkeepers’ antics -- which are too menacing to take seriously.

But there is nothing funny about those injuries -- especially now that we know so much about the dangers posed by head injuries.

Aggressive, reckless goalkeeping must be a thing of the past. It cannot be allowed in the modern game. And a big thank you to Lee Dixon for speaking out on a serious topic that so many simply fail to recognize.

england, referees
21 comments about "The misuse of VAR, the sins of goalkeepers ... and a big thank you to Lee Dixon".
Read more comments >
Next story loading