The images that come to mind when one recalls George Tarantini tend to be of his warm, sometimes mischievous, smile. Or animated reactions on the sidelines covering a wide spectrum of emotions. 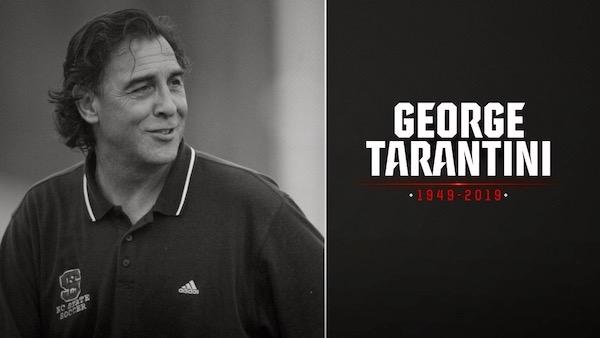 But the photo I'm remembering now shows a somber-looking Tarantini hugging his player. Tarantini's right hand is on the players back, his left hand embraces the player's head so that rests gently on the coach's shoulder. The photo is from December of 1990, when Tarantini coached one of the best, most entertaining teams in the history of college soccer. The player being consoled by Tarantini is Scott Schweitzer, who failed to convert in the penalty kick shootout against UCLA in the NCAA Division I semifinal. A cruel ending for a player -- and a team -- who had played superbly during that game, and the entire season.

"That's the system," Tarantini said. "We have to go with it."

The UCLA team included Brad Friedel, Chris Henderson, Joe-Max Moore, Mike Lapper, Cobi Jones and Jorge Salcedo -- and went on to win the final against a Rutgers team that had Alexi Lalas on the backline. Tarantini's team featured Roy Lassiter, Henry Gutierrez, Dario Brose, Tom Tanner and Alex Sanchez in the attack, and included Schweitzer and Curt Johnson in defense. They had beat defending national champ Virginia in the ACC final and in the NCAA quarterfinals to interrupt a Cavaliers dynasty that would include the next four national titles. 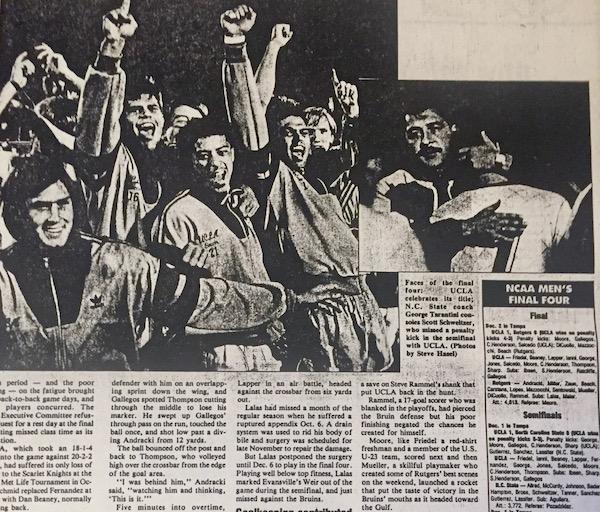 “We, as a team, didn’t always know what he was doing but coach was always a step ahead of us,” N.C. State alum Robert Gibbs, who was President Barack Obama’s press secretary, told the News & Observer. “His ability to take a bunch of kids and turn us into what we were in 1990 was nothing short of amazing.”

Before Tarantini arrived at North Carolina State, the Wolfpack men's program had been known for its Nigerian stars, such as all-Americans Chris Ogu and Sam Okpodu. Tarantini, who became Larry Gross' assistant in 1982 and the Wolfpack's head coach in 1986, turned it into an American-dominated program. He looked to talent coming out of the ODP system in which he worked. His arrival shortly after Bruce Arena took the helm at Virginia and John Rennie became Duke coach helped make the ACC the destination for the Northeast's top talent.

Tarantini had coached Tab Ramos as Region 1 coach and youth national team assistant coach. Ramos, who was a first-round pick by the Cosmos in the 1984 NASL draft, played at NC State in 1984-87. NC State players during Tarantini's tenure included Pablo Mastroeni (1994-97), who played for the USA at the 2002 and 2006 World Cups, and Albertin Montoya (1993-95), who coached the USA at the 2012 U-17 Women's World Cup and coached WUSA 2010 champion FC Gold Pride. Johnson is president of the USL's North Carolina FC and NWSL's North Carolina Courage.

“He was one of the first people in college soccer who outspokenly attached himself to attacking soccer,” Johnson told WRAL in 2015 upon the 25th anniversary of the 1990 ACC Championship. “Now it’s commonplace -- every coach does that. But it wasn’t commonplace then. He wanted to entertain fans and wins games with a possession, technical style and attack-minded mentality. And that was not the usual form at all."

Tarantini, whose brother Alberto was a 1978 World Cup champion, immigrated to the USA from Argentina. Upon settling in New York, he worked odd jobs and in construction while learning English and making youth soccer connections in New York. Tarantini, while coaching soccer at Dutchess Community College, connected with Rennie when he was Columbia's head coach.

"He called me to tell me about a player," Rennie, who would become lifelong friends with Tarantini, told the News & Observer. "Obviously, I didn't know George. But once you talk to George, you never forget him. The next time I saw him, he was the Region I under-20 coach. And I became the Region III coach when I came down here to Duke."

Tarantini retired from coaching in 2010 after 25 years as head coach of N.C. State with 243 victories. He died on Wednesday at age 70.