No. 2 Virginia handed No. 14 Virginia Tech its first defeat of the season with a 2-0 decision on late goals by Meghan McCool and Diana Ordonez.

McCool's goal was her eighth of the season, while Ordonez, who was playing in her first game after missing three games due to injury, has 10 goals in seven games for the Cavaliers, who are 9-0-1.

-- In other ACC action, No. 7 Clemson suffered its first loss of the season when it fell at home to No. 6 Florida State, 2-1.

The Seminoles were led by Deyna Castellanos and Yujie Zhaowith a goal and an assist apiece. Castellanos’ three points moved her into third all-time at FSU with 103 points. 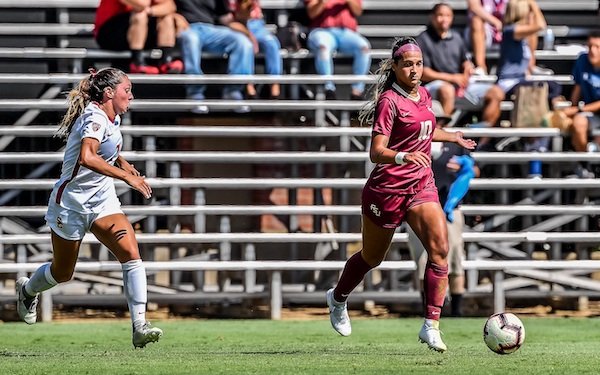 SEC. No. 10 Arkansas held off No. 11 Vanderbilt, 1-0, at Razorback Field. Junior Parker Goins scored the game-winner in the 70th-minute for her fifth goal of the season.

Big 12. No. 20 Texas Tech beat No. 18 Oklahoma State, 1-0, to hand the Cowgirls their first loss of the season. Demi Koulizakis scored the game's only goal on an assist from Kirsten Davis in the 64th minute.