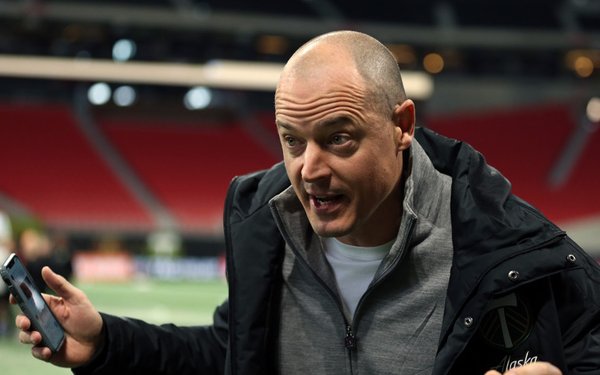 MLS fined Portland Timbers investor-operator Merritt Paulson $100,000 for misconduct directed at the match officials on the field following the Timbers’ 2-2 tie with the New England Revolution on Wednesday night.

The nature of the "misconduct" was not disclosed.

The Timbers, who having been struggling at home, blew a 2-0 lead late in the match against the Revs, the final game of a 10-game homestand. The tying goal came on a penalty kick in the seventh minute of stoppage time that was awarded after Video Review determined Portland defender Larrys Mabiala fouled Wilfried Zahibo.

The Timbers were upset that a similar play involving forward Jeremy Ebobisse, who had both Portland goals, did not result in a penalty kick for them. And they questioned why stoppage time went on so long.

“Is that a PK or not?" asked Timbers coach Giovanni Savarese. "What about Jebo’s? Was that different than that PK? I just saw it right now, it’s exactly the same. One’s a PK, the other one’s not. Why two extra minutes when they said four?"

Savarese went on to praise the Revs for coming to play.

"It was a great game today," he said. "Two good teams. Two good teams that tried to play to try to get a result. Unfortunately, not everybody on the field was at that level.”

The result extended the Timbers' winless streak to four games, but the point moved them into sixth place in the Western Conference standings, ahead of FC Dallas on the first tiebreaker (total wins) and ahead of San Jose in eighth place by one point.

Ebobisse's first goal snapped a 319-minute scoreless streak for the Timbers, who finished the 10-game homestand with a 4-4-2 record. They should have hoped the run of matches at Providence Park, which was expanded and re-opened in June, would leave them somewhere in the top four in the Western Conference.

In recent months, Portland has been the epicenter for the dispute between fans and MLS over its ban on the display of "Iron Front" flags and banners. On Tuesday night, that ban was lifted for the remainder of the 2019 season.

Paulson's fine is believed to be the largest MLS fine for conduct by an owner related to a match. (He was fined $25,000 for an incident with match officials in 2012.)

Real Salt Lake owner Dell Loy Hansen was fined an amount believed to be around $150,000 by Commissioner Don Garber in 2015 for going on a radio show during discussions with MLS players on a new collective bargaining agreement and saying that talks about free agency were "one of those real waste-of-time conversations" and a "go-nowhere conversation." (The players ended up getting limited free agency for the first time.)