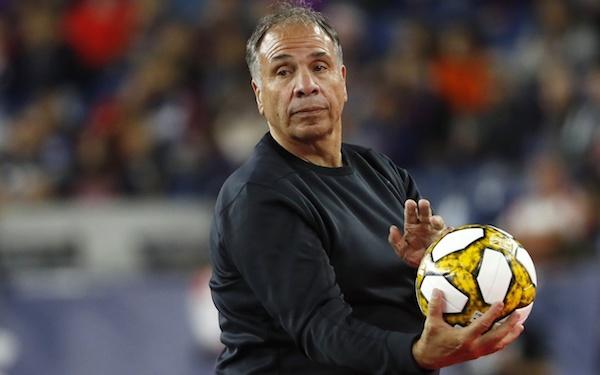 So how much of a long shot was the New England Revolution to make the playoffs after its coaching change?

"I don’t know how I always see the probability of doing this and that," said Revs coach Bruce Arena after a 2-0 win over NYCFC on Sunday clinched the final playoff spot in the Eastern Conference. "Like when the USA played Trinidad in the last qualifying game, [they] might tell you we had a 99 percent chance of winning that game and I think we had a 99 percent chance of not making the playoffs. So, as they say, s*** happens, you know.”

New England was 2-8-2 and in last place in the Eastern Conference when Brad Friedel was fired on May 9. It wasn't until four games later that Arena took over for interim coach Mike Lapper on the sidelines but there were already signs that there was something to work with.

The Revs won their first game under Lapper and tied the next two games and went 6-0-2 in their first eight games under Arena.

"We were not in position to lose many games, starting from the middle of May," said Arena. "So they’ve done an exceptional job. This week wasn’t any more difficult than we’ve faced over the last three months or so."

New England has lost just two of 18 games under Arena, though a spell of six ties in eight games made the playoff chase closer than it should have been.

When he took the job in May, Arena said he knew little about the Revs and nothing about why the team wasn't doing better.

"I had no idea what I was getting into, to be honest with you," he said. "I still don’t know why the hell I took this job, but I’m here. There’s nothing I can do about it now, right? No, I mean, I knew very little about the players, to be honest with you. A couple of them, I knew from being in and around the league and maybe the national team program. But I didn’t really know anything about them.”

What has he learned?

“They’re coachable," he said. "They’re just a good group of players in the locker room. Of all the teams I’ve had all the years, this is as good as any of them to coach every day, to deal with away from the field. That says a lot. I give them nothing but high marks, even if we didn’t make the playoffs this year and kind of failed towards the end. I still think this season has been a real positive.”

Much of the talk upon Arena's hiring was what he would do to put the team in a position to win in 2020 and after that. Making the playoffs this season is an added treat.

"Well, I’m not sure you’d call what we’ve done special," he said. "It’s really a positive. I’d like to think our best years are ahead of us. So, I’m not ready to be dancing in the woods or having parades and stuff because we made the playoffs. I think, the goal here, is to get this club better positioned to be one of the top clubs in the league and one day, win an MLS Cup. So, we’re not there yet.”