No goals, no skill -- it must have been awful, right?

I dread coming home after watching a 0-0 tie. I know the first reaction from my family will be pity. "Oh, you poor thing, it must have been terrible." I resent that sympathy, no matter how well intended. I will defend that scoreless game and my right to have been there. Sometimes, the worse the game, the more that you can take away from it. 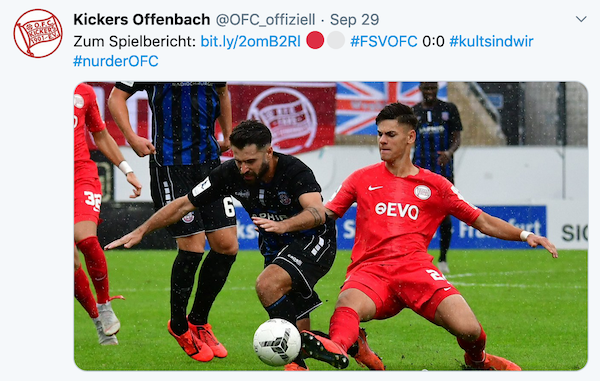 This past Sunday I went to a 0-0 game in the German regional fourth division, a local derby between FSV Frankfurt and Offenbach Kickers. The Kickers are a former German Cup winner (albeit back in 1970) and Bundesliga stalwart who have fallen on very hard times. Their rivalry with Frankfurt goes back decades, but that rivalry was with current Europa League participants Eintracht Frankfurt, not the minnows of FSV (who are more of a neighborhood club than representatives of the city). Offenbach's presence in this regional league is an ongoing humiliation.

Thanks to a ticketing snafu beyond our control, I and my visiting American friend ended up with a handful of Frankfurt fans among the hordes from Offenbach. At first, we were apprehensive. The visitors were loud and enthusiastic, and sang a series of crude and insulting songs about the hosts. Around 20 minutes into the game, however, this verve subsided and their love of Kickers dissolved into impotent frustration, manifested through agonized howls and unhinged caterwauling. This was further fueled over the 90 minutes as Offenbach failed to create a single clear-cut chance.

Frankfurt was not much better, but did at least manage to string some passes together and to test the Offenbach keeper once or twice. Inevitably, it started to rain, as if the weather Gods were passing judgment on this dire spectacle. There were fouls, flare-ups, multiple mistakes, hoofed clearances that may have bothered the odd cloud-sitting angel, and so many shanked attempts on goal that you feared for the safety of the linesmen.

In the little row of Frankfurt fans, we began to exchange glances and to laugh up our sleeves. The Offenbachers no longer cared about insulting our lads. The whole focus was on venting their ire against the hopelessness of their own players. The two men directly in front of us were on their feet and screaming for most of the second half. A third fan just kept hiding his head in his hands and moaning, like he was watching a debate in the Senate. To our right, a manic pensioner rose again and again to focus his fury on one particular player by repeatedly screaming, "***hole! ***hole!" until we were sure his aging heart would burst.

None of this contributed to the sporting quality before us, but it hugely added to the entertainment. "They're even worse than us," snickered one Frankfurt fan. It was like watching the live unraveling of an epic drama called 'Hubris.' And it left us wondering about faith -- how can so many grown adults, with their collective experience of life and its serial disappointments, hope to have their wishes fulfilled by 11 fourth-tier journeymen trying to control a perfectly round leather object on a greasy field?

"In what world could what we have just seen be classified as entertainment?" I wondered aloud to my friend as we left the stadium (he returns to the U.S. today with a possibly refreshed appreciation of Major League Soccer). "And how," I mused, "did 4,600 people actually give up their Sunday afternoons and pay money to watch it?"

Until I thought later about what we had been a part of. This was nothing to do with a result, or any sense of achievement, or a display of endeavor and talent. This was pure human theater showcasing the triumph of absurdity over reason. Two colliding forces that mutually neutralized, stultified and destroyed, in an arena where skill was banished and creativity the dirtiest word of all. A game in which both teams unjustly took away a single point for being equal worst.

A shockingly bad game, but somehow memorable nonetheless. In other words, a typical afternoon of soccer. Long live the 0-0 tie!

(Ian Plenderleith is a coach and referee in Germany's amateur and youth leagues. He holds the Uefa C-License and coached youth soccer in Maryland from 2004-2014. His latest book, "The Quiet Fan," is available here. His previous book, "Rock n Roll Soccer: The Short Life and Fast Times of the North American Soccer League," is available here.)

germany
8 comments about "No goals, no skill -- it must have been awful, right?".
Read more comments >
Next story loading