Megan Rapinoe assisted on close-range goals by Allie Long in the first half and Mallory Pugh in the second half for a 2-0 USA win over South Korea on Thursday. 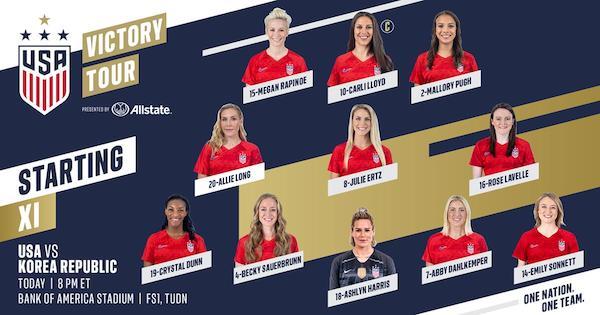 MIDFIELDERS
The USA's most dynamic attacking player, Rose Lavelle, played with an urgency her teammates lacked in the first half and most of the second. The Koreans should have seen three yellow cards for their fouls on Lavelle. By her standards, central midfielder Julie Ertz underwhelmed offensively while meeting more defensive demands than she had in recent games -- because the Koreans often outnumbered the USA's three-player midfield. A hit-and-miss performance by Allie Long on the left wing included an important hit: her close-range volley that made it 1-0.

FORWARDS
In her first game since the World Cup, a rusty Megan Rapinoe caused few problems on the left wing for the Koreans but got an assist with an out-swinging free-kick delivery to Long and a cross to Mallory Pugh. After a first half of miscues, Carli Lloyd hit the crossbar with a 15-yard shot that she should have buried and headed over the goal from three yards. Pugh hit the crossbar from a narrow angle in 38th minute with her only shot. But as has been the case in recent games, she too often passed poorly and rarely threatened on the dribble. Her long lulls have become worrisome but she appeared at the right place to head home from three yards for the game's second goal.

SUBSTITUTES
Christian Press' crisp, low pass was perfectly timed to set up the golden chance that Lloyd squandered in the 48th minute. But Press squandered a one-on-one chance from close range in the 68th minute, shooting within the reach of keeper Kim Minjung's foot. Shortly afterward, she hit the post from close-range, had two shots blocked off the line, and shot straight weakly to the keeper. Tierna Davidson committed a foul within a minute of entering at halftime, was sharper when she stopped Kang Chaerim in the 56th minute, but gave up a corner kick to in the 60th minute. Jessica MacDonald missed from four yards in the 85th minute.

TRIVIA 1: The USA has now scored in 48 consecutive games.

TRIVIA 2: With the 106th U.S. win with her at the helm, Jill Ellis broke Tony DiCicco's record.