Jill Ellis' reign as U.S. women's national team coach ended on Sunday as did the USA's 17-game winning streak when it was held to a 1-1 tie by South Korea in the final game of the Victory Tour. For much of the match, the Koreans, who lost all three games at the 2019 Women's World Cup, were the sharper team. 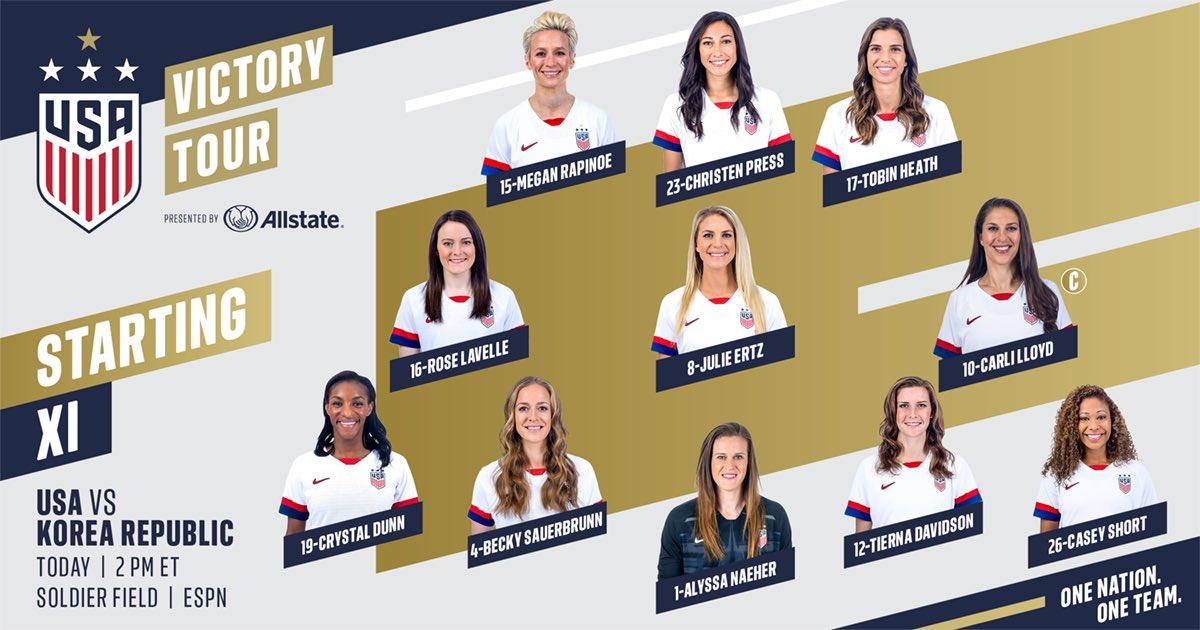 USA Player Ratings
(1=low; 5=middle; 10=high.)
GOALKEEPER
Alyssa Naeher could do nothing to stop Ji Soyun's shot on the South Korea goal but denied Ji later in the first half. Naeher almost had an assist in stoppage time after coming forward on a last-gasp corner kick, but backup Korean keeper Kim Minjung denied Mallory Pugh from close range.

DEFENDERS
Poor defending by the backline led to South Korea's opening goal in the 34th minute. Tierna Davidson was unable to win a long free kick played to the edge of the penalty area, and Casey Short slipped on the ball played on to Ji, who eluded Becky Sauerbrunn and beat Naeher from 18 yards. Sauerbrunn's bad touch almost gifted the Koreans a second goal later in the first half, but Ji's shot lacked pace to beat Naeher. Crystal Dunn had a chance to put the USA ahead early in the first half but her angled shot went wide with an open goal.

MIDFIELDERS
Carli Lloyd returned to midfield, where she starred for USA at the 2015 Women's World Cup, and was the USA's most active attacker. She had the equalizer only three minutes after South Korea went ahead when she scored on a header off Megan Rapinoe's corner kick. A late winner was nullified on a harsh offside call. Julie Ertz had the USA's best chance in the first half when she hit the post in 26th minute, but for once, she was unable to take command in midfield, where South Korea's quick passing kept the USA chasing and often fouling. Rose Lavelle exited the game at the break after taking a knock to her ankle.

FORWARDS
Megan Rapinoe's service was the USA's most effective weapon in the first half. She found Lloyd on the equalizer after earlier forcing Korean keeper Kang Gaae to punch away a dangerous ball into the area. Christen Press had an open look from top of the area but put her shot wide in stoppage time. Tobin Heath had a quiet game before exiting in the second half.

SUBSTITUTES
After Son Hwa-Yeon was sent off in the 84th minute for her second yellow card, the USA piled on the pressure. In stoppage time, Jessica McDonald hit the post and then Mallory Pugh's close-ranger header was tipped by Kim Minjung off the crossbar. Minutes earlier, Press fed a wide-open Pugh, who couldn't get anything on her shot that Kim saved.

TRIVIA 1: The tie ended the USA's winning streak at 17 games, one game short of the team record.

TRIVIA 2: Ellis finished her career with a 106-7-19 record, having coached 132 international games, more than any coach in U.S, women's history.