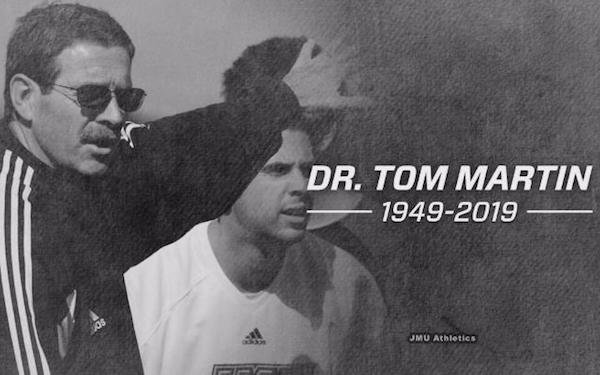 He had been inducted into the JMU Athletics Hall of Fame on Sept. 13.

His 478 victories rank seventh all-time among coaches with at least 10 years leading a Division I program and 18th among all coaches at all four-year institutions across all divisions.

The Dukes qualified for 10 NCAA Tournaments and made consecutive quarterfinal appearances in 1994 and 1995.

“All of us with JMU Athletics are saddened to hear the news of the passing of a JMU Athletics legend, Dr. Tom Martin,” JMU director of athletics Jeff Bourne said. “Many will look at his career achievements with the all-time victories, consecutive NCAA quarterfinal appearances, multiple other NCAA runs and CAA Championships, but what set Doc apart was his approach to college athletics and the profession of coaching. He worked to develop his student-athletes as individuals in all facets: academics, leadership, teamwork, life skills and more. It was those traits that earned him the Hall of Fame induction that we celebrated just a few weeks ago. Our thoughts and prayers are with the Martin family, his wife Cherylen, son Sean, Tom’s siblings and extended family.”