U.S. coach Raphael Wicky has named his 21-player roster for the 2019 men's U-17 World Cup that kicks off in Brazil Oct. 26. Wicky will be assisted at the World Cup by Ante Jazic, Barry Pauwels, Matt Pilkington and goalkeeper coach Mike McGinty.

Never has the USA taken a team to a U-17 World Cup with as much pro experience as in this squad.

"This experience is very important," Wicky said. "First-team minutes at the highest level of competition, highest level training -- highest level hanging out in the locker room, where they experience how the top players behave. How they prepare, when they're serious, when they joke around around. Those experiences are extremely valuable for their development."

Gio Reyna, who captained the team at the Concacaf U17 Championship, is playing for Borussia Dortmund's U-19s but saw action in first-team games during the Bundesliga preseason.

"What I expect from them is to be role models in preparation, in the seriousness, in the warmup, in the locker room, raising their voice when something goes wrong, when a guy doesn't follow what we want to do, on or off the field," said Wicky. 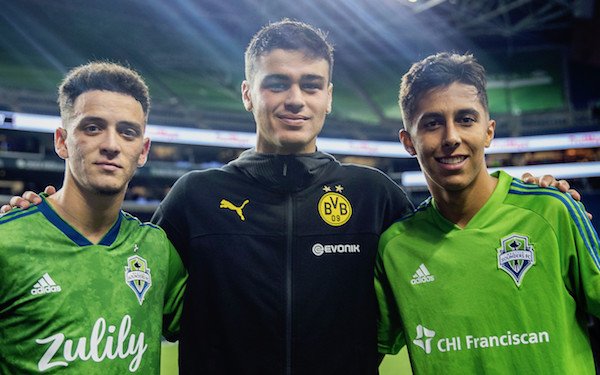 Fourteen players have had USL experience.


• The seven players on the World Cup squad who weren't part of the Concacaf U-17 Championship (at which the USA finished runner-up to Mexico while qualifying for the World Cup): goalkeeper Aaron Cervantes, defenders Sebastian Anderson, George Bello, Nicolas Carrera, midfielders Maximilian Dietz, Ethan Dobbelaere and forward Andres Jasson.

• Carrera, Dietz, a German-raised midfielder,  and Dobbelaere debuted for the U.S. U-17s in early September at the four-nations under-17 tournament in the Netherlands, where the USA beat Mexico (2-1), the Netherlands (3-1) and lost to Denmark (4-1).

• The six players who were on the 20-man Concacaf U-17 Championship roster in May who were not picked for the World Cup squad are defenders Axel Alejandre, Mauricio Cuevas, Josh Tolkin, midfielder Gilbert Fuentes and forwards Jack de Vries and Tyler Freeman.

Wicky took over six months ago, shortly before U-17 World Cup qualifying.

"Our style will be similar to what we've done in the Concacaf championship and at the Netherlands tournament, where we beat Mexico and the European champion Holland," he said. "You can call it possession-based football, because we're going to try to play out of the back. But it's not always possible. Against Holland [a 3-1 U.S. win] we had only 40 percent of the possession, because they were simply good and they didn't allow us to have more possession. But important for me is to know what to do with the amount, the percentage of possession we have. Twenty percent, 30, 50 -- against Mexico [a 2-1 U.S. win] it was 70 percent."

On opening against three teams from three continents:

"They will have different styles, different philosophies," Wicky said. "But we will focus on how we want to play while knowing what to expect from the opponents."