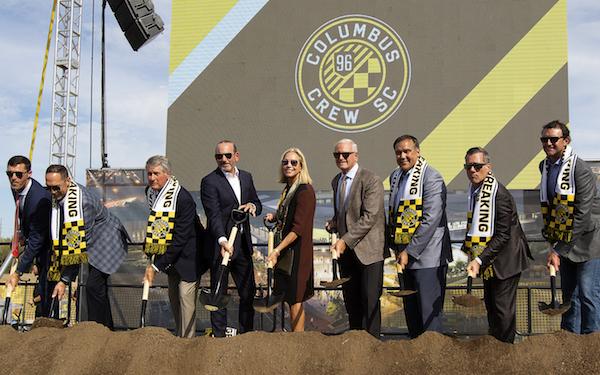 Ground-breaking on a new soccer stadium in Columbus took place on Thursday afternoon, making the Columbus Crew the first team to begin work on a second soccer stadium.

A new downtown stadium was part of the commitment MLS was looking for in keeping the Crew in Columbus. Work on the stadium to be built the heart of the Arena District is expected to be completed in July 2021.

Until then, the Crew will remain at Mapfre Stadium, its home since 1999 on the outskirts of Columbus.

“This is our 20th groundbreaking for an MLS Stadium,” MLS commissioner Don Garber said at the groundbreaking event. “The next couple of years, that'll grow to 25. So you think about the first stadium ever built in our league was built here in Columbus. Now 20 years later, we're breaking ground on our 20th Stadium.”

Mapfre Stadium was built by the Hunt Sports Group, the Crew's original owner, at a cost of $28.5 million.

The new downtown stadium will be built by the new Crew owners -- Dee and Jimmy Haslam, owners of the Cleveland Browns, and Pete Edwards, the long-time Crew team doctor -- and cost $300 million, up from an original estimate of $230 million.

The 20,000-seat soccer stadium is part of the Confluence Village mixed-used development in the Arena District. The Crew's plans include the redevelopment of the area around Mapfre Stadium into a recreational sports park.

The city of Columbus agreed to commit to $50 million for infrastructure related to the stadium and Mapfre rec project. An additional $63.9 million in public investment was recently reported by the Columbus Post-Dispatch.

The city defended the spending difference as infrastructure work already planned or needed in the Arena District, including $25 million for a parking garage and $2 million for a pedestrian bridge.

Franklin County also agreed to cover about $45 million of the costs of the projects.