There was plenty of brilliance from the USA during the first half and a joy to its game that we're not used to seeing. Weston McKennie's hat trick started before the clock had hit the 1-minute mark when he finished a sharp sequence of passes. The Cubans may have for the first 45 minutes seemed like a sparring partner, but the USA's play was undeniably impressive as it scored the first six goals of a 7-0 win on Friday. Another plus for the USA, besides the first-half fireworks, is that Canada -- the third team in this Concacaf Nations League Group A -- has already played Cuba twice and mustered only a 6-0 home win and a 1-0 away win. On the downside was a pretty dismal second half and the inability to turn not one of 17 corner kicks into a goal. The USA plays at Canada on Tuesday. 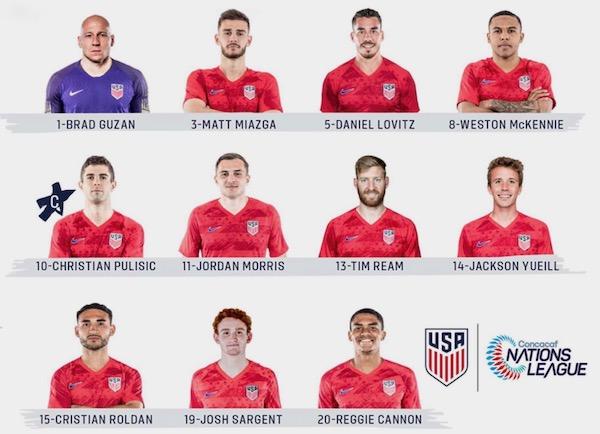 Brad Guzan didn't have to make a single save against the Cubans, who did unleash four shots but none near the frame.

Right back Reggie Cannon had hockey assists on the first two goals and a pure assist on the fourth. Daniel Lovitz at left back hit the cross that hit the hand for the PK on the seventh goal. Central defender Matt Miazga shanked a ball back to Guzan in the first half, his lackadaisical pass in 59th minute set up a shot for Maykel Reyes, and he had to foul to win a midfield head ball in the 69th minute. His central defense partner Tim Ream played with his usual composure, demonstrated wonderfully when he robbed the ball from Reyes, flicked it past him, and followed up with a crisp pass. He launched a perfect long-range pass to Cannon on the wing in the 86th minute.

Weston McKennie may have played only 45 minutes, but he scored three times in the first 13 minutes, assisted on Jordan Morris' 3-0 goal, and delivered a sweet back-heel pass that helped create the fifth goal. Jackson Yueill impressed with mid- and long-range pinpoint passes, including on the buildup to goals No. 4, 5 and 6. Cristian Roldan didn't have highlight moments but had a goal denied by an incorrect offside flag and was part of a midfield that helped the USA to 76% of the possession.

Jordan Morris's hat trick of assists made two of McKennie's goals relatively easy finishes, he set up Josh Sargent's goal with a clever pass, scored the third goal, and made the own goal happen. Sargent finished with an excellent left-footed strike, but his many misses included shooting five yards high with only the keeper to beat in 90th minute. Christian Pulisic got on the scoresheet only with a penalty kick that would have hit goalkeeper Nelson Johnston in the chest if he hadn't tried to guess a side, and Pulisic delivered 13 of the 17 unsuccessful corner kicks. But the danger that Pulisic's frequent forays posed in the first half undoubtedly contributed to the Cubans' disarray. There were no more goals after Pulisic took a seat on bench.

Only one of the goals came after subs came on. Paul Arriola was fouled brutally shortly after coming on and then failed to make an impact. The former New Zealand international Tyler Boyd has now played six U.S. games without impressing since scoring twice against Guyana. He couldn't beat Luis Paradela on the wing and his mis-hit passes included a six-yard attempt to Roldan. Sebastian Lletget's bad touch after a give-and-go with Arriola prevented him from taking a close-range shot, he coughed the ball up the midfield in a game in which that hardly happened to U.S. players, and he shot wide from 18 yards with a clear sight on the net.

TRIVIA. Weston McKennie's goal at the 30-second mark is the second fastest in USA history behind Clint Dempsey's 00:29 strike against Ghana at the 2014 World Cup.