Players who express political views tend to divide sports fans in much the same way that most issues split opinions in a democratic society. There's nothing wrong with that. Prominent sportswomen and men -- especially those who themselves have been subject to prejudice and oppression -- should not be prevented from furthering important debates about how society should react to, say, bigotry, misogyny, homophobia, violent threats and hate speech. 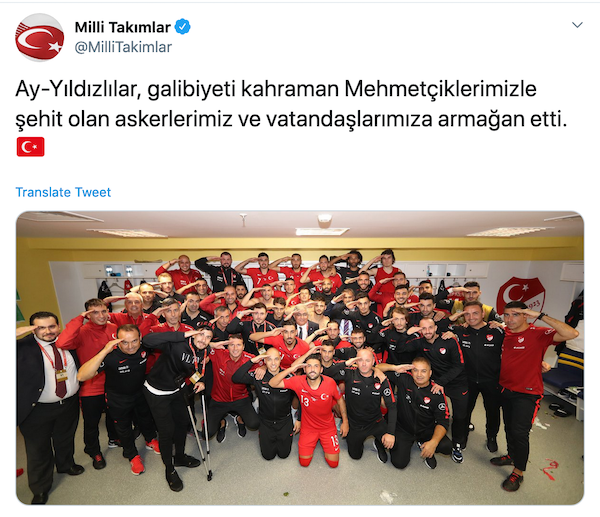 Politics in sports becomes more problematic when players and teams are used as instruments to support dubious governments and their actions. UEFA has announced that it will be investigating a military salute given by the entire Turkish team after it scored a late winner on Friday night in a European Championship qualifier against Albania. For good measure, the whole squad and backroom staff posed for a second photo saluting in the locker room, which was then posted on Twitter with a message of support for Turkey's military action on the Syrian border. That began last week immediately after the U.S. withdrew its support for Kurdish fighters, who have lost an estimated 11,000 people over the past few years while fighting and defeating the extremist Islamic State of Iraq and Syria (ISIS).

UEFA's disciplinary regulations forbid "the use of gestures, words, objects or any other means to transmit a provocative message that is not fit for a sports event, particularly provocative messages that are of a political, ideological, religious or offensive nature." It remains to be seen if UEFA issues any kind of punishment for Turkey's clear infringement of this rule, but don't expect more than a perfunctory fine. The country's expulsion from the tournament might send a stronger signal, but nobody's placing bets on that outcome.

The Turkish team's gesture of support for its government's unilateral act of war (always presented as "self-defense"), in a country where President Recep Tayyip Erdogan has suppressed dissent and silenced the free press, came just as the first major casualties were reported in the country's offensive against the Kurds. These have included summary roadside executions of civilians by the Turkish-backed Syrian National Army. According to the Syrian Observatory for Human Rights, their soldiers dragged the Kurdish politician Hevrin Khalaf, 35, the secretary general of the Future Syria party, out of her car and shot her, along with her driver, an atrocity recorded on one of the assassin's mobile phones. Seven other civilians were executed in the same way.

It's difficult to watch sport when major global events bump up against its artificially combative rhetoric of fights, struggle and glory. In a way, though, we should be grateful to the Turkish team for its collective gesture. Thanks to their unanimous salute, there may be a lot more people now aware of the serious situation on the Turkish-Syrian border, and its potential for further human rights atrocities and yet more instability in the Middle East. Furthermore, pledging their allegiance to Erdogan at least shatters any pretense that vacuous symbols such as national flags and soccer teams are harmlessly divorced from real-world events.

Meanwhile, in other sports news, Chinese Premier Xi Jinping warned on Sunday that, while pro-democracy protests in Hong Kong continue, any attempt "to split China in any part of the country will end in crushed bodies and shattered bones." This is the country which hosted the 2007 Women's World Cup and the 2008 Olympic Games. I believe it has some ties with the National Basketball Association too. It's also a country where bodies were crushed and bones were shattered during previous pro-democracy demonstrations, in Tiananmen Square in 1989. Perhaps FIFA, the International Olympic Committee and the NBA hadn't heard about that event (sports executives have notoriously short memories), which ended in death and defeat for democracy, but a comprehensive victory for state murder. 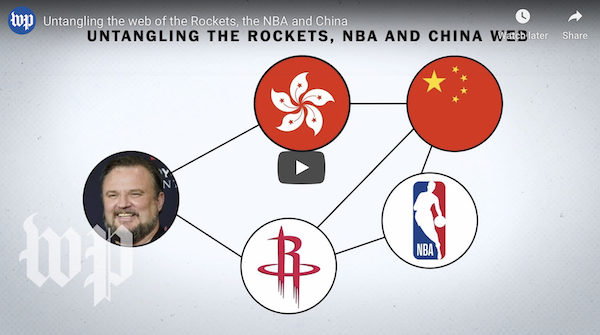 The playbook for exploiting sport for political ends was written by the nationalist socialist regime of Germany, when they staged the 1936 Olympics to showcase their friendly, peaceful country and pretend that all was well and good under a Nazi regime (highly recommended reading: 'Berlin 1936: Sixteen Days in August' by Oliver Hilmes). The country brought about its own complete and inevitable destruction just under a decade later, along with much of the continent around it, but autocratic governments ever since have been hosting major sports events for image-burnishing, shameless propaganda, and the promotion and projection of of (sports) business-as-usual.

Fans are left with a simple choice. Do we continue watching the game while ignoring human rights abuses and claiming they have nothing to do with sports? Or do we stop watching until sporting bodies (and governments) take on board a message that promoting authoritarian despots is unacceptable? Choosing the latter will not in itself take down any given regime, but at least we won't be propping it up.

The next major ethical test for soccer fans has been looming for years -- the 2022 World Cup in Qatar, a monarchic autocracy which has been building stadiums through the mass exploitation of cheap migrant labor from Nepal since 2009. The issue of absent democracy and labor exploitation aside, the number of cardiovascular deaths likely due to heatstroke of young, healthy Nepalese workers (between 2009 and 2017) has been estimated at a staggering 1,300, according to recent medical research by the Cardiology Journal. Human Rights Watch last week called on Qatar to urgently investigate the cause behind so many fatalities.

Don't expect the English FA or the U.S. Soccer Federation, say, to be pulling their teams from the tournament due to the mere matter of a few hundred deaths among the economically dispensable. They rely on the World Cup for a large shot of income. The question is, will most fans watch the 2022 World Cup regardless? It's a choice we all can make, free of commercial pressure, as we consider the importance of sport, and the importance of life.