With fall soccer seasons well underway in the USA it’s important to note that upper extremity injuries happen more often than you probably think. Published studies in all age groups, including adults, show injury rates in the upper extremities at about 20% of all injuries.


In some ways the upper extremity injuries tend to be more “serious” than lower extremity injuries, with a large percentage of fractures (broken bones) and dislocations. Many will require urgent treatment in the emergency department. The overwhelming majority occurs from falls rather than player to player contact.

Two published studies shed light on the incidence of upper extremity injuries in soccer. This one focused on high school and college age players and this study looked at players in the 7- to 17-year-old group. Both studies used databases of emergency room visits, thus they are biased towards more serious injuries. However in my experience on the sidelines the 1-in-5 incidence is accurate even for those injuries not requiring a trip to the emergency department.

In the youngest age groups, a fall on to the outstretched arm is incredibly common during many sport activities. These children (especially in the 4- to 8-year-old group) are learning how to move, have less developed spatial awareness than older kids, and they will tend to have quite a few falls. You’ll see a large number of wrist sprains and growth plate injuries in the youngest players. Often, these injuries are managed by the pediatrician and don’t end up in the emergency department. Because of that, I believe emergency department databases underestimate the actual incidence of these injuries.

If you’re a coach or parent, be aware that upper extremity injuries in soccer are common and can be serious. Have a plan for how to evaluate these injuries on the field. 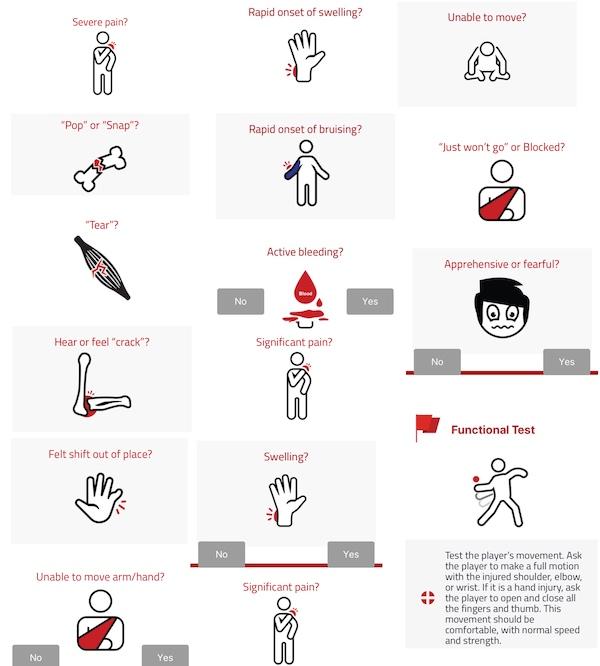 Images are from the Good to Go app but the above do not represent the entire assessment procedure.

Key Points:
• Upper extremity injuries in all soccer age groups occur more often than most people think, with about 20% of all injuries happening to the upper extremities.

• The majority of upper extremity injuries tend to be broken bones and dislocations, thus quite a few can be called “serious.”