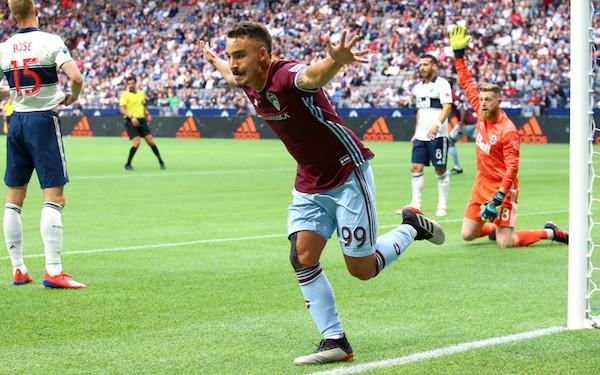 Robin Fraser knew all about Andre Shinyashiki even before he ever saw him play.

One of Fraser's best friends in soccer is former U.S. Olympian Jeff Hooker, his teammate on the Colorado Foxes in the early 1990s. Hooker is in his 28th year as the women's head coach at the University of Denver, and when they'd talk, he'd tell Fraser about a Brazilian the DU men's team had.

At the 2019 adidas MLS Combine, Fraser got to see Shinyashiki for himself.

"Andre missed the first day of the combine," said Fraser, who was then the Toronto FC assistant coach, "but there were some small-sided games on second day as opposed to full games they used to have, and within five minutes you'd say he was the best player there. He's been a player I've been excited about ever since."

The Colorado Rapids traded up for Shinyashiki, taking him with the fifth pick in the 2019 SuperDraft, and Fraser was united with him late in the season when he was named the Rapids head coach. By then, Shinyashiki was on course to becoming the 2019 MLS Rookie of the Year.

"He turned out to be good and everything I thought he was going to be," said Fraser. "Literally within watching him for five minutes at the combine. He just has a different awareness about him. He's technically very clean. He knows how to get himself open and is really proficient with the ball as well. His confidence is very high. He certainly doesn't carry himself like a rookie."

On a trip to the Gothia Cup in Sweden, a teammate told Shinyashiki about Montverde Academy, whose soccer program has sent players to clubs in leagues across Europe and South America in addition to MLS. In that regard, Shinyashiki is like Jack Harrison, who left Manchester United's youth system to enroll at Berkshire School in Massachusetts, and went on to star at NYCFC before returning to England, and other players who see the U.S. educational system as a different path to the pros.

The adjustment wasn't easy -- Shinyashiki almost left between his junior and senior years -- but he ended up signing at Denver, one of the most ambitious men's programs in the country. In Shinyashiki's sophomore season, the Pioneers went to the Men's College Cup. As a senior, he led the country with 28 goals -- and five hat tricks -- finishing with five more goals than he scored in his first three seasons combined.

"I think that it went both ways," he said. "I was familiar with the Rapids. I had gotten games against the first team with the PDL. I got to see how the coaching staff operated, obviously not at the same level as I do now, but at some level. For them, it gave the staff a chance to look at me."

The Rapids liked what they saw so much that they paid the Chicago Fire $100,000 in General Allocation Money and gave it their No. 15 pick in the draft to acquire the Fire's No. 5 pick and be assured of drafting Shinyashiki.

The start of the 2019 season was a disaster for the Rapids, however. They went winless in their first 11 games and lost nine games in a row before Anthony Hudson was fired shortly after making remarks about working with a "bottom group of players."

"For me," said Shinyashiki, "it was always about staying resilient and knowing that I was going to do whatever it took to get on the field. And regardless of the coaching change and regardless of the team losing or regardless of whatever, you have to keep working on yourself and getting better. That's the only way I ever went about things. I believe in myself."

Sessions with Conor Casey. Shinyashiki's break came when Conor Casey was named interim head coach. In his first three months with the Rapids, the young Brazilian had become tight with the former U.S. national team forward who was working as the Rapids' assistant coach.

"That brought us very close together," Shinyashiki said. "We stayed after practice and worked on finishing, worked on things around the box, things that were very important to me. Especially when he became head coach, all that relationship we built from the past couple of months was very important."

In Casey's first game in charge, he brought Shinyashiki off the bench in the 75th minute of a 0-0 tie at the LA Galaxy and seven minutes later Shinyashiki scored to give the Rapids a 1-0 win, ending their 11-game winless streak. Colorado went 12-7-4 the rest of the season and wasn't eliminated from playoff contention until the final day of the regular season.

Casey's advice to Shinyashiki? "He told me to work on every chance you get. Always put the ball on frame. Don't waste any opportunity. Don't try to score the best goal of your career. A goal is better than no goal."

Shinyashiki finished with seven goals and three assists in 31 appearances. Most important, the Rapids won or tied every game in which he scored.

"If you look at some of the goals he scored," said Fraser, "he seems to thrive in these situations. To get in front of goal, to have some of the opportunities, a calmness comes over him. Some of that ability is inherent. Over time and doing it in different arenas, he is just comfortable and composed in front of the goal. His confidence is that of a player who will be effective for a long time." 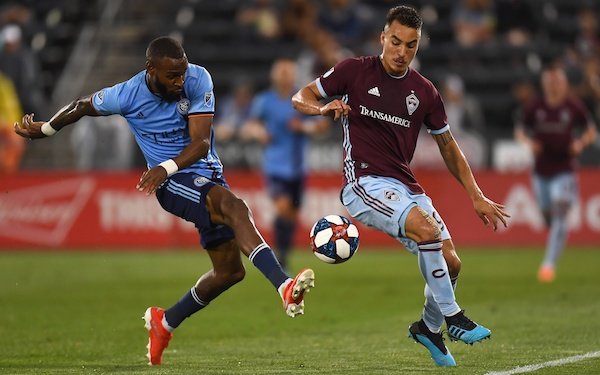 Shinyashiki was just one of several of several young players who stood out for the Rapids. New surroundings allowed Kellyn Acosta, in his first full season after a move from FC Dallas, and Keegan Rosenberry, acquired from Philadelphia in a trade for allocation money, to thrive. A loan deal (soon to be made permanent?) brought Lalas Abubakar over from Columbus, and he stabilized the backline. Jonathan Lewis arrived in a trade from NYCFC. Academy products Sam Vines, Cole Bassett and Sebastian Anderson, who is with the U.S. U-17s in Brazil, all contributed.

"We had a couple of things not go our way early in the season," said Shinyashiki, "but we didn't give up. We were building chemistry-wise, and we ended up clicking. That's why we were so good the second half of the season."

Fraser says his players don't realize how good they are.

"We actually have a good group of players," he said. "Early on, there was a misconception that they were not a good group of players. There are some really talented players. There are some young and really interesting players that have different skill sets. Because of their resiliency as a group, they were a pretty formidable group at the end of the year. They need to have an appreciation that as a group they are really quite good."

Fraser didn't arrive in Colorado until the end of August, replacing Casey as the permanent replacement for Hudson, so he was just beginning to put his stamp on the Rapids, who went 5-2-0 after he arrived.

"There were some attacking principles we started talking about late in the year, some defending principles," he said. "As we go forward, they can look at some things they did really well and grab it and own it and understand there are things they can do better."

And that versatility should put Shinyashiki in good stead as the Rapids decide how to use the two Designated Player slots that will be freed up in 2020.

Support from his family. Shinyashiki hopes to get home to see his family in Brazil in the offseason. One of the biggest thrills of his college career was to score the fifth and final hat trick of his senior season with his parents on hand for Senior Day in 2018. His parents and sister came for a month this summer to stay with him in Denver.

"My parents watch every game from home," he said. "My siblings, too. My grandparents refuse to watch because they say they're going to die because it makes them so emotional."

Interest in MLS is growing in Brazil.

"A few years," Shinyashiki said, "people didn't really know what it was. With such investments and teams bringing in big players everyone in Brazil knows about, it is changing their perspective."

While he misses his family, Shinyashiki knows he must begin preparing for next season, even with the longer offseason. He took a couple of days off last week to travel to Florida and returned to find snow on the ground.

"A couple of snowflakes is not going to stop me from doing what I have to do," he said.