In a performance that will rank among the worst in U.S. national team history -- two years and five days after the debacle against Trinidad & Tobago in Couva -- the USA fell to Canada for the first time in 34 years. Throughout the 2-0 loss in Toronto, Gregg Berhalter's team played inferior soccer to a Canadian team that is, no doubt, far more dynamic than we've seen during those three-plus decades. But particularly distressing was the USA's lackluster, unimaginative play during the half-hour it had to conjure an equalizer. 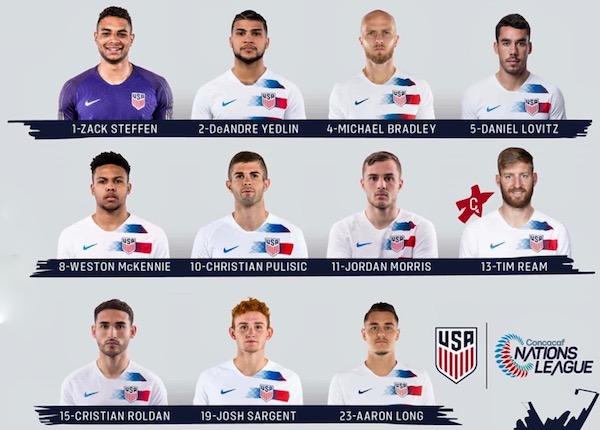 The foot save Zack Steffen made on Jonathan David's close-range shot prevented the USA from going behind early -- as did David shooting wide on the rebound. Steffen blocked Junior Hoilett's 72nd-minute one-on-one shot with his chest, but Lucas Cavallini's sharp strike beat Steffen at the near post.

It didn't bode well that not a minute had passed after kickoff when Daniel Lovitz resorted to fouling Alphonso Davies. With right back DeAndre Yedlin nowhere in sight, Tim Ream got roasted badly by Davies in the 15th minute. Ream's night got worse, as he gave away the ball in the lead-up to both goals. On a day when the USA needed more numbers in the back, Yedlin failed to make up for his defensive fallibilities with successful forays. He should have created a scoring chance in the 9th minute when he lofted a cross past everybody. His mis-hit square pass deep in Canada's half as the USA sought an equalizer gifted Canada a counterattack. Both Yedlin and Long failed to interfere with the Scott Arfield's pass to Davies on the goal that made it 1-0. The lack of urgency displayed by Long -- he jogged, then strolled -- as Cavallini chased down Jonathan Osorio's pass on the 2-0 overshadowed the times when Long mustered some decent tackles.

Jordan Morris set up a golden chance for Christian Pulisic early in the second half but, perhaps because Berhalter played him deeper and saddled him with the defensive work that Weston McKennie is better suited for, Morris rarely threatened from the wing or appeared often enough in the Canadian penalty area. The two times he did were when he fed Pulisic and when Arfield blocked his first-half shot. Cristian Roldan's horrible back pass set up David's big first-half chance. He did start off with an excellent pass to Yedlin, but also struggled to keep possession and in the second half struck a simple pass out of bounds. Michael Bradley was saddled with more defensive responsibilities than anyone on the field thanks to Berhalter's questionable tactics of playing McKennie, noticeable mainly for his scowls and four fouls, higher up.

Christian Pulisic's first half included losing the ball four times on the dribble, slamming a cross into a defender's head, and a low shot blocked by a defender that he should have hit high. Five minutes into to the second half, he failed to finish a clear shot from 12 yards, blocked by keeper Milan Borjan. Pulisic was subbed in the 60th minute -- and once again looked like a young man who doesn't enjoy his time with the national team. (U.S. Soccer reported that Pulsic was subbed because of "having experienced flu-like symptoms in the days leading up to the match.") Josh Sargent failed to get a shot on goal and was yellow-carded for a wild tackle.

Paul Arriola replaced Pulisic, who although ineffective at least required the Canadians to interfere with his play. What role Gyasi Zardes was supposed to play is anyone's guess. Nick Lima's entry in the 74th minute was a trade of outside backs -- when one may have thought that a fresh attacker would suit the situation.

TRIVIA. Canada's goals were its first against the USA since 2007 -- 12 years ago and five games ago.