Let’s review what we’ve been told we “knew” we had to do to make U.S. men’s soccer better:

1. Get more players to play in Europe and fight for playing time. Check.
2. Increase professional standards in the USA as well. Check.
3. Funnel our best players not just into one academy in Bradenton but a network of academies with direct paths to the professional ranks, bypassing college soccer and putting teens in pro games. Check.
4. Get Sunil Gulati out. Check.

And the men’s national team is ... worse?

At this rate, by the time we have promotion/relegation and hundreds of free academies that collect the best 7-year-olds from every street and suburb in the country, we’ll be battling Turks and Caicos in Concacaf Nations League C.

We know the men’s team has issues. And we’re obsessed with quick fixes for them. It’s a whole chapter in my upcoming book, "Why the U.S. Men Will Never Win the World Cup: A Historical and Cultural Reality Check."

Granted, the book isn’t called "Why the U.S. Men Will Never Win in Toronto." That’s a different level of expectation.

But if you’ve listened to SiriusXM radio shows or been saddled with a Twitter account, you’ve probably heard all of the quick fix proposals, some better reasoned than others.

Tony Meola, the Hall of Fame goalkeeper and one of the more patient radio hosts in the business, finally had to call out a caller who insisted the country had many other players who should’ve been called for the Canada game instead of the players on the field.

Some callers, though, waxed eloquent about Meola’s tenure on the national team in the late 80s through early 00s. In Meola’s day, the bulk of the players played high school and college soccer. Meola played at Virginia for Bruce Arena. Tab Ramos, hailed by many as the man who should’ve been hired as national team coach instead of Gregg Berhalter, played at N.C. State on some very physical teams under the tutelage of George Tarantini, who recently passed away.

No one said we should go back to the time of physical college players (though Ramos was, of course, superbly skilled). But if I hear “grit” and “bite” one more time, I’m going to drive 30 miles to the nearest Waffle House. 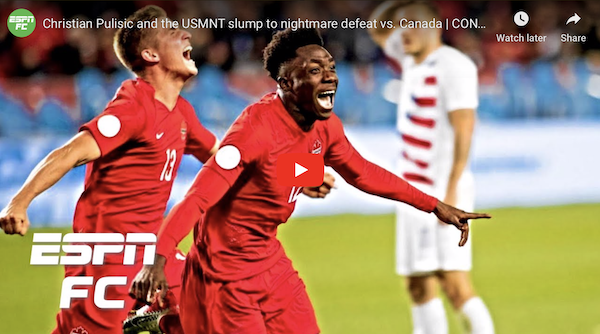 Some callers said Berhalter should’ve stuck with the same lineup that routed Cuba. After Couva, didn’t people lob the opposite criticism at Bruce Arena?

Some callers wondered if politics dictated the selection of a bunch of domestic players. But just like the last qualifying cycle, the USA had plenty of players based in top European leagues, while the opponents had a substantial MLS contingent.

Meola’s co-host, Brian Dunseth, pointed out the impact MLS has had throughout the region, a fact that was reinforced by the presence of Vancouver Whitecaps academy alumnus Alphonso Davies on the Canadian side. Davies hasn’t played all that much for Bayern Munich this season, but it doesn’t seem to have invoked the same crisis mentality the U.S. soccer community currently feels about Christian Pulisic being caught up in the Chelsea shuffle.

(I’ll raise a hand here and confess -- I don’t think Frank Lampard’s delineation between international players and a mere “price tag,” as he referred to Pulisic, bodes well for the young American getting a fair shake at the EPL club. But I don’t think Pulisic is in some awful career-ending run of form, either.)

In a similar vein: “The U.S. is fixated on a domestic coach,” said one caller who lives in a country that broke the bank to hire Jurgen Klinsmann and even turned to a European coach, Pia Sundhage, to right the ship when the women’s team was in dire straits.

We’re also no closer to a resolution on a national “style,” a discussion that began in earnest when Claudio Reyna trotted out a national curriculum to a bunch of skeptics ranging from the national coaches convention halls to Bruce Arena and Steve Nicol at the neighboring MLS Draft. A few years ago, we all wanted to play like Barcelona. Now we all think Berhalter is some sort of naive rube for daring to play the ball out of the back.

The funniest, after at least five hours of angry calls on SiriusXM, was a caller asking why everyone was so calm. That was even funnier than the caller who lamented the cost of travel soccer and then regaled the hosts with tales of taking his kid to Barcelona.

It’s not that the criticisms were all easily refuted. Berhalter didn’t exude a lot of passion or give fans any reason to believe he had tried to fire up the team. The long wait to hire a coach, essentially wasting a year of national team development, looks much worse now. And U.S. Soccer keeps putting off the hire of a new CEO, perhaps realizing that critics everywhere have their knives out ready to pounce if they promote Jay Berhalter, Gregg’s brother, or perhaps anyone else whose leadership was called out anonymously in Glassdoor reviews and New York Times interviews.

(Less well-developed: the argument that U.S. Soccer waited too long to get a new president. Apparently the split-second in which Sunil Gulati banged his gavel at the end of the 2018 annual general meeting and officially handed off to Carlos Cordeiro within an hour or so of the election was too slow.)

What happened in Toronto was relatively simple: A team that had circled this date on the calendar long ago effectively suppressed and overran a team that was far less interested, and the gap in skill wasn’t enough to make the latter team win anyway.

We shouldn’t be surprised by the difference in intensity. All we heard going into this game was that the Nations League wasn’t really useful. Canadians couldn’t be blamed for thinking we arrogant neighbors felt this competition and this game were beneath us, and they were ready to teach us a lesson.

We can be aggravated that the USA lacked the skills and sense to beat pressure. We’re all supposed to have been teaching those skills for the past decade, whether it’s under the “dribble first, ask questions later” mentality that many coaches have preached or the “death by 1,000 passes” approach in Reyna’s now-discarded curriculum.

But are we now supposed to toss aside such grandiose notions? If we have no patience with Berhalter trying to get players to play out of the back, should we just slam the ball upfield to a target forward who can lay the ball off for the magical feet of Pulisic? Should we, in the words of so many callers to English radio shows, quit mucking about and play 4-4-2?

U.S. Soccer needs changes from the ground up. MLS has decent academies, but the rest of the youth soccer landscape is a fragmented mess -- not just on the boys’ side, as Paul Riley lamented on Twitter. Some of the lawsuits are unavoidable results of various soccer entrepreneurs’ hubris, but some should’ve been avoided.

And one thing that didn’t seem to come up on the radio call-ins: The men are still playing under an expired CBA. That point seems to have been lost while the women’s lawyers claim the team is due eleventy billion dollars in back pay and U.S. Soccer counters by pointing to the existence of the NWSL despite scant investment. Playing without a new contract probably isn’t good for morale.

We can identify problems. We can come up with solutions. But a mythical knight galloping across the ocean from Europe isn’t going to prevent more Couvas or Torontos. It’s going to take a bit more than that -- from all of us.