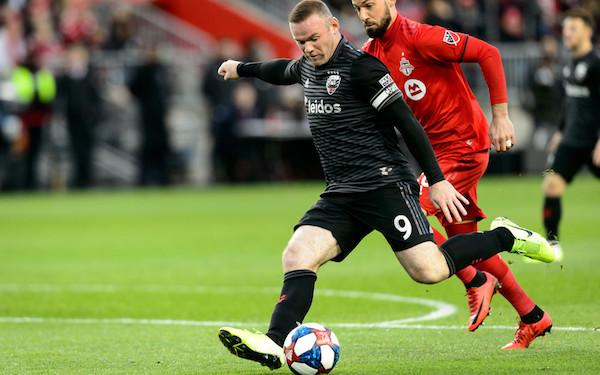 Wayne Rooney's MLS career, which began with such fanfare last season when he joined D.C. United and became the toast of Washington, ended miserably on Saturday when United fell to Toronto FC, 5-1, in Round One of the Eastern Conference playoffs.

Rooney wasn't even on the field for the end of the game. He had been subbed off at the end of the first overtime period during which Toronto FC scored four goals.

For a fleeting moment, it looked like Rooney's stay might be be extended when Lucas Rodriguez scored in the third minute of stoppage time to even the score at 1-1 and send the match to overtime. But United had a poor game and allowed two goals in the first five minutes of overtime.

Rooney wasn't a factor in the game. Indeed, he had not been a factor for United late in the season.

Rooney finished the regular season without a goal in United's last 12 games, a far cry from 2018 when he had 12 goals and seven assists in 20 games to lead United into the playoffs with a strong run after its move into new Audi Field.

Rooney entered into MLS lore for the play at the end of a match against Orlando City in August 2018 when he won the ball in United territory, pushed into Orlando territory and lofted a long ball that teammate Luciano Acosta headed into the goal for the winner.

In 2018, Rooney was a frequent guest as Washington sporting events with his children and visited the White House on multiple occasions. (President Donald Trump's son Barron is a big soccer fan and has played in the Development Academy.)

But 2019 was different. He was arrested in early January at Washington Dulles International Airport and charged with public intoxication and paid a small fine. There were reports that his wife, Coleen, was unhappy with life in suburban Maryland and wanted to return to England with their four children,

"El Senor Wayne" got off to a strong start to the 2019. He had four goals and three assists in his first four games as United started out with a 3-0-1 record.

But the love affair between Rooney and D.C. United ended in early August when he flew to England and announced he was cutting short his stay in MLS with two seasons left on his contract to join Derby County in January as player-coach. He never scored a goal again for United after returning from England.

Rooney was popular with his teammates and had been generous with his time with the media and a great spokesperson for MLS, but he did not talk after Saturday's loss in Toronto.

'I think he gave a lot to the organization," said D.C. United coach Ben Olsen. "He was a great teammate. I think he was good to our fans and he was very appreciative of the support he got with our fan base and the community, the D.C. area. It's an unfortunate way for him to finish. I am sure he would have wanted to hit the back of the net and push us into the next round but that's not how it went."