In the last article of this sequel, I have discussed some of the differences between the soccer landscapes of Belgium (ranked No. 1 in MNTs) and the USA (ranked No. 23, down two spots in the FIFA men's rankings on Thursday). Let us briefly summarize our findings in the recent article.

This – I believe – is very much possible in the years to come, if you consider the various business factors in our country. This is why so far Chicago has focused on increasing the revenues of U.S. Soccer and they should be complimented on that effort. But then it is a chicken and egg problem. In order to increase the revenues, you have to have a better product on the men’s side. Unfortunatel,y women’s soccer still globally does not produce the revenues that men’s soccer does, although the revenues on the women’s side have increased substantially.

In this article we will concentrate on the governance structures. Now let us look at the governance model of each FA. This is the structure of the Belgian FA’s National Council or as they call it, AGM. 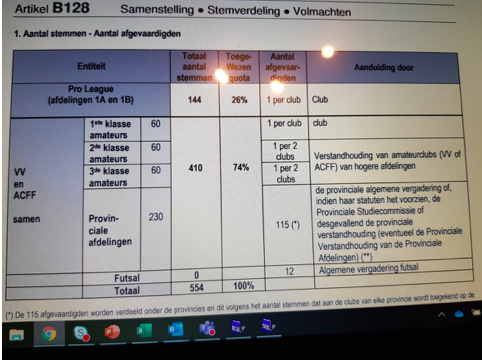 Although it is in Dutch, one can see that there are two groups of constituents: Pro League (1A and 1B) clubs and the Amateur Clubs (Division 1 through 3 and regional associations). There are no representatives in the Belgium FA’s AGM representing players, coaches, referees or past presidents etc.. It is basically a club’s federation.   The pro clubs have 26 percent of votes in the AGM whereas the amateurs – which represent adults, youth for both genders- has 74%. Let me remind the American reader unlike the USA in Europe most clubs have both adult and youth teams. Needless to say Belgium FA has promotion/relegation system from the amateur clubs to all the way to Jubiler Pro League.

In the USA, the national council has the following structure:

Let us compare with the Belgium FA’s AGM, amateurs (Adults plus Youth) have 51.26% of the vote whereas the professional clubs have 25.63% in the U.S. Soccer’s National Council. If you look at mere numbers, Belgium and the US FA’s AGM’s have similar professional club representations. Athlete’s Council plus others constitute the remaining 23% of our AGM. The major difference is not in the numbers.

The major difference is in the structure of the constituents. In the Belgium FA, there is one block of votes for amateurs – adults and youth for men and women. There is no fragmentation like we have in our youth block – USYSA, U.S. Club, AYSO, SAY and USSSA. Only out of those five organizations, U.S. Club and USSSA have some adult teams registered with them. At the end of the day, those five organizations are competing for the young players who want to play soccer under US Soccer’s jurisdiction.

The more players an organization has the higher their revenue is through registration and the higher their representation in the National Council. Although recently a Youth Task Force was formed to address the problems of the fragmentation, it is very difficult to bring all five parties to agree in key problems and solutions in a pay to play environment. Let alone for them to agree on any mandate that will eventually make our MNT to be one of the best in the world since the system as it is do not reward for player quality but rather player quantity. If you think that you can end pay-to-play system overnight, you are delusional. The pay-to-play system and the fragmented youth scene are the results of our sports culture, and soccer history. Without understanding both, you cannot implement “something” to change the soccer landscape so that our MNT is one of the best 10 and our WNT can keep its dominance.

Whereas in Belgium there is permeability between the two blocks of professional clubs and amateur clubs via promotion/relegation (albeit one of the most limited in the world). Also the youth clubs are rewarded via FIFA’s Training Compensation and Solidarity Payment (TC&SP) systems. The local governments subsidize local youth clubs through various venues since clubs do not charge players for playing for their clubs. I should remind the readers that there is pay-to-play system also in Europe, but the goal is to increase the revenues of major clubs utilizing their brand names. The main goal of these projects is not to find talented players – although they market it that way – but rather to generate revenues. Does it sound familiar?

So it is easier to convince both blocks in Belgium for a common goal and the mandates necessary to reach it. As a result, they have done decided 10 years ago for the goal of their MNT to be one of the best in the world, convinced their constituents in the AGM and took the necessary steps to achieve it. These necessary steps are what I call “something”.

It is clear that both FIFA requirements via statues of promotion/relegation and Training Compensation/Solidarity Payment are key factors in uniting the various constituents of the AGM of Belgium and for that matter for any country. Blaming our system for not implementing promotion/relegation will show a severe misunderstanding of our sports culture and the history behind MLS. Although inevitably one day, we might have promotion relegation in our soccer system from the amateurs to the professionals, I do not foresee that to happen at least in the next decade. On the other hand, personally I do not understand the legal issues like ‘Child Labor” or “Antitrust Law” for not implementing TC&SP in the USA soccer landscape. I think the issue is not legal but rather “political.” The majority of the Youth Soccer constituents of our system might find the implementation of TC&SP as a threat to their pay-to-play business model. I believe Youth Soccer constituents can be convinced for the implementation of TC&SP by U.S. Soccer if it had the financial resources.

So there is a clear difference in the two governance systems based on their soccer history and the soccer culture of their countries. Along with the financial disparity between two FAs the issue of governance makes it difficult to compare apples with oranges.

There is one more issue that creates a difference but this one is rather curable. The constituents of the respective MNTs and the diversity issue. You will have to wait for a fortnight to read about it. Until then…

youth
3 comments about "USA, Belgium and 'Something' (2)".
Read more comments >
Next story loading