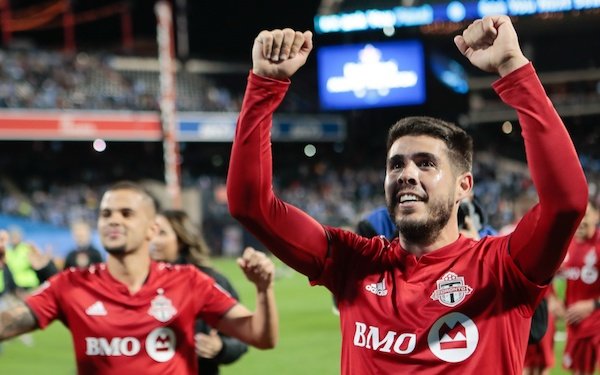 Unable to play at the baseball stadium that has been its home for five seasons, New York City FC moved from The Bronx to Queens -- and Yankee Stadium to Citi Field, home of the Mets -- for its opening match of the MLS playoffs.

The Eastern Conference top seed then went out and fell to Toronto FC, 2-1.

The loss marked the fourth year in a row NYCFC fell in the Eastern Conference semifinals.

And it ended planning problems MLS might have had if NYCFC had advanced to MLS Cup as the top seed. (Yankee Stadium is slated to host an Ivy League football game on the eve of the MLS championship game.)

Better team. Toronto FC came into the match after beating D.C. United, 5-1, with four overtime goals in Round One and was the better team on Wednesday despite playing without injured U.S. internationals Jozy Altidore and Michael Bradley for the second straight playoff game.

That was no surprise since the Reds had been the better team in their two meetings with NYCFC in the regular season, a 4-0 win in Toronto and 1-1 tie at Yankee Stadium.

TFC forced NYCFC keeper Sean Johnson into four saves but couldn't score in the first half.

But two minutes into the second half, Spaniard Alejandro Pozuelo took advantage of some indecision in the NYCFC defense and beat Johnson to a backpass and opened the scoring.

But a stunning mistake by Ronald Matarrita cost the hosts the game in the 90th minute. The Costa Rican hauled down Richie Laryea in penalty area, and Pozuelo won the game with a panenka penalty past Johnson.

NYCFC had a bye in the first round, making its layoff two and a half weeks since it played it last match -- which seemed to hurt the Pigeons.

“I don’t know where we were the first half," said NYCFC captain Alex Ring. "I thought Toronto was much better. They played much better than we did. And it’s a shame because, like I said, the last nine months were for nothing because we weren’t ready today."

Favorable conditions. The baseball configuration of Citi Field reduced the dimensions of the field, which TFC coach Greg Vanney said was to his team's advantage.

“We came in the first half we wanted to eliminate any time they had on the ball and we put a lot into the first half," he said. "It’s a small field, we were pressing them, we were making it difficult, we were winning balls, we were attacking again. The only thing that didn’t come out of the first half was a lead. In every other aspect, I felt that we just dominated it."