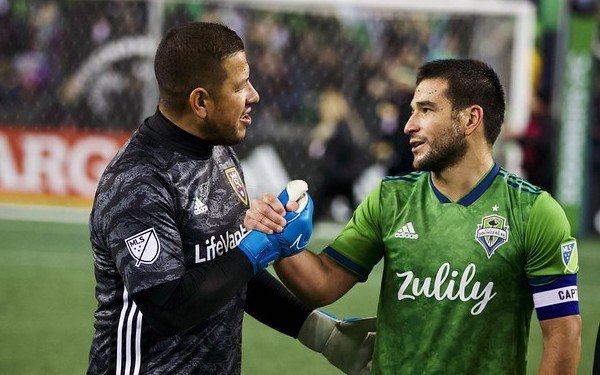 Second-half goals from Gustav Svensson and Nicolas Lodeiro gave the Seattle Sounders a 2-0 win over Real Salt Lake that moved them into the Western Conference final for the third time in four seasons.

The Sounders, who will play the winner of Thursday's LAFC-LA Galaxy match on Tuesday, captured the conference title in both 2016 and 2017.

Lodeiro had the first chance of the first half when he hit the post, but the Sounders spent much of the first 45 minutes chasing the game.

Seattle came out in the second half and immediately took control. Kelvin Leerdam had two great chances but was denied by RSL keeper Nick Rimando, who was playing his last game after a 20-year MLS career.

Rimando made another stop on Cristian Roldan before Svensson put the Sounders ahead with a header at the near post in the 64th minute.

RSL had come on strong to beat Portland, 2-1, in Round One but never looked like it would break down the Sounders' defense, which lost Roman Torres with a hamstring injury in the first half.

Lodeiro put the game away with a goal in the 81st minute, the sixth of his playoff career, tying him for first in Sounders history with Clint Dempsey.

The win proved to be a lot easier than the 4-3 victory over FC Dallas in Round One when the Sounders blew 2-0 and 3-2 leads and needed some overtime heroics from keeper Stefan Frei to hold off a Dallas surge.

The second-half performance also countered the stereotype about the Sounders being on their last legs.