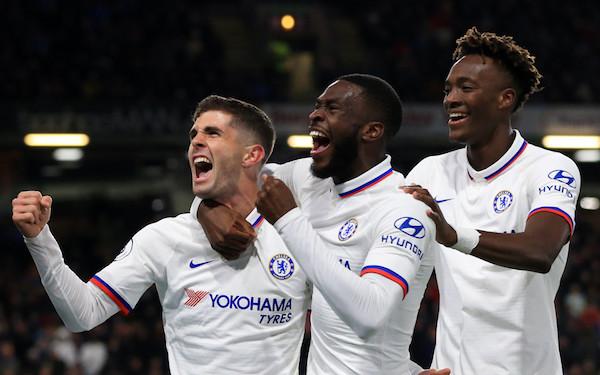 In each of Chelsea's previous three games -- all wins -- the 21-year-old American had come off the bench and helped set up goals.

So after going eight weeks without a Premier League start, it was inevitable that Chelsea manager Frank Lampard would give Pulisic a shot, making him the only change in the starting lineup from the 1-0 win at Ajax in the UEFA Champions League on Wednesday for Saturday's match against Burnley at Turf Moor.

Lampard said he did not want to break up a winning lineup, but getting Pulisic into the lineup proved fortuitous.

Pulisic scored his first three Premier League goals to lead Chelsea to a 4-2 win over Burnley for its fourth straight league win and seventh straight in all competitions.


Among the records Pulisic broke, he became ...

(The only other American to score a Premier League hat trick was Clint Dempsey for Fulham in a 5-2 win over Newcastle United in 2012.)

Pulisic's burst of emotion after his first goal showed how much the goal meant to him after a difficult start to his first season in England following a $73 million transfer from Borussia Dortmund.

"The first few months were definitely hard," Pulisic said afterwards. "I had a few starts earlier in the season and then I fell out a bit and tried to get any minutes that I could and make an impact."

Lampard said Pulisic's work in training and in the minutes he's given him in games paid off.

"The way that he's trained over the past few weeks and the impact he's had when he's been playing has said to everyone, 'Here I am' and what talent he does have," the Chelsea manager said afterwards. "I'm really pleased for him today, it's what we need from all our attacking players — to be a threat, to play like that, to have a ruthless edge about how they finish. He showed the full package today.

"The first goal, where he waits, then a step over, then moves away from the players. That sort of thing is brilliant and I hope it gives him the confidence that it should do. I'm pretty sure that it will do."

A week earlier against Newcastle United, Pulisic came off the bench and helped set up Marcos Alonso's late winner but also created other chances for himself and others in his 27-minute stint.

"The last few weeks," he said, "I was able to show that again, helping the team coming in especially in the Newcastle game. I think they saw that and gave me a start today. I didn’t think that it was going to happen right away, being a big success and coming into a big club like this, it takes time. So I’m happy with the progress I’ve made so far and I’m going to keep going from here."

Lampard alluded to Pulisic arriving after just one week off following the Gold Cup as a factor in his slow start.

"He went and played for his country in tournament football over the summer," he said. "When I got the job, he had one week off and he said he wanted to come back. I asked him if he wanted two weeks, but he wanted a week. I had to take that into consideration for him leg-wise and freshness-wise."

Lampard has plenty of other options on the wings while he has tried to bring Pulisic along.

"Callum [Hudson-Odoi]’s come back," Lampard said of the 18-year-old Englishman whom Pulisic replaced in the lineup. "Willian’s been playing fantastic, so I will have rotation issues. I’ve just tried to get the best out of him. He’s going to be a big player for us, a big, big player."