As bad as the result was, the manner in which the USA lost was the most disturbing. The U-17s lacked imagination in attack and with only a few exceptions looked ordinary on the ball. The lack of commitment in midfield left the backline repeatedly exposed against Les Lionceaux, who were making their U-17 World Cup debut.

Despite fielding its most experienced team ever at the U-17 level -- 10 of the 14 players who played on Sunday are pros and five have already played in MLS -- the USA crumbled under the pressure.

The defeat is a huge setback for the U-17 program, which has been in flux for the last two years since the end of the residency program in Florida, and for its head coach, former Swiss international Raphael Wicky, who was hired in March as the fourth coach of the current cycle and is now the only full-time coach left on the men's side of the youth program. 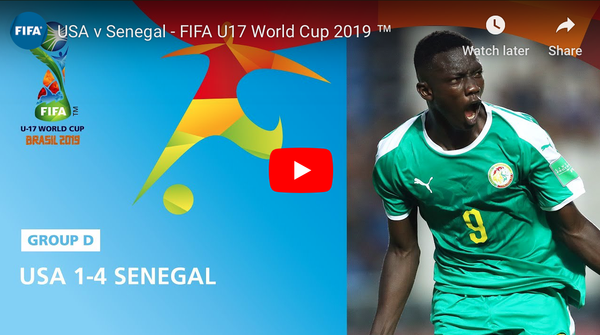 The USA got off to a dream start when Gianluca Busio opened the scoring with a header off a cross from Joe Scally in the 3rd minute, but the game soon turned in favor of Senegal, which shredded the U.S. defense, creating numerous opportunities for itself.

The USA held the Senegalese at bay until stoppage time at the end of the first half when defender Tayvon Gray failed to clear a goal kick flicked on into the U.S. penalty area and Souleymane Faye equalized.

Invisible attack. The USA had a huge edge in possession and did well to control the tempo for portions of the game, but its players rarely took on Senegalese defenders. Center forward Ricardo Pepi and Busio were mostly invisible, and Gio Reyna, one of Borussia Dortmund's most promising youth players, rarely got into dangerous positions.

The USA started the second half better than it finished the first half and almost scored in the 55th minute when Gray's volley and rebound were both cleared off the line by Senegalese defender Birame Diaw. The USA faded badly in the last 25 minutes, however, and conceded three goals.

The first came off a U.S. corner kick of all things. Senegalese keeper Ousmane Ba grabbed the corner kick and quickly punted the ball into the U.S. half, where Souleymane Faye was all alone. U.S. keeper Damian Las did well to stop Faye's initial shot, but no U.S. defender was on hand to clear the ball away, allowing sub Aliou Balde to bury the rebound.

Four minutes later, the Senegalese again broke through. Souleymane Faye moved in from the left wing and fired a centering pass Las failed to hold on to, allowing Amete Faye to tap the ball into the empty net.

Gray's rough outing ended with a red card in the 87th minute when he failed to control a long ball and then hauled down Souleymane Faye from behind. On the ensuing free kick, Pape Sarr completed the scoring for Senegal with a brilliant shot into the top corner of the goal.

Late replacement. With group matches coming up against Asian champion Japan and European champion Netherlands, Senegal was supposed to be the easy game.

Senegal was a late U-17 World Cup entrant, replacing Guinea when the latter was kicked out of the tournament for using overage players at the 2019 Africa U-17 Cup of Nations. Senegal, which did not win a game in qualifying, dropped eighth players this summer amid rumors that they too were overage.

Despite its lack of experience, Senegal has a long history of sending players to European clubs from academies like Diambars FC, founded by Patrick Vieira, and Generation Foot, which produced the majority of the players for the Senegalese U-17s.