When I took my first officiating course a decade ago in Howard County, Maryland, our tutor over two weekends -- a very wise and articulate referee named Craig Proffen  -- sought not only to teach us the "Laws of the Game." Much more importantly, he taught us when best to apply them. He stressed that while it was our duty to know the rules by heart, once out on the field the referee was the ultimate judge, jury and executioner. He used this phrase several times. That is, if a player waiting to be subbed in during a U-9 rec game runs on to the field of play a couple of seconds before their teammate has left it, you as a referee can ignore the rule that says they need to be shown a yellow card. 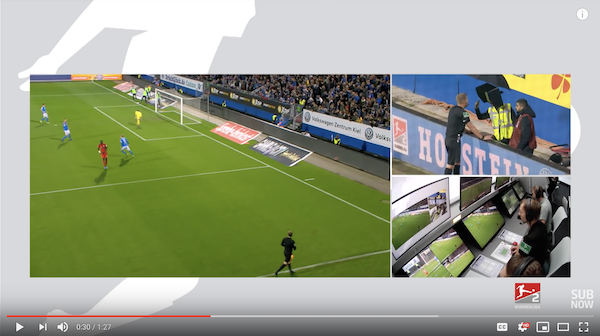 Now, it's only seven days since I was demanding in this column that the rule on dissent be applied more stringently from the top downward. That's because it's an issue that affects thousands of games every weekend. There are many other rules that it's often better to ignore, thanks to that much cited but unwritten Law 18 -- common sense. One of those rules to generally ignore led to a most curious penalty call in Germany's second division on Friday night.

Holstein Kiel was leading VfL Bochum 1-0 when Bochum's Congolese forward Silvere Ganvoula dragged a shot far wide of Bochum's goal. A Kiel substitute, warming up behind the goal line, instinctively put out a foot to stop the ball and played it back to his goalkeeper for the goal kick. No one paid it a second of attention until the Video Assistant Referee (VAR), seeing their finest hour rise before them, informed center referee Timo Gerach that the substitute, Michael Eberwein, had touched the ball inches before it would clearly have gone out of play.

Gerach took a look at the replay, awarded Bochum a penalty, and yellow-carded Eberwein. Bochum scored to make it 1-1. Kiel eventually recovered to win 2-1, and we saw lots of shots of Eberwein wearing a contrite, sheepish grin.

The German media universally declared that the decision was "correct." Which, technically, it was. Why does this rule exist, though? Obviously, to deter players or other officials from stepping on to the field and interfering with play. Had Eberwein prevented a goal or stopped a Bochum forward from retrieving the ball, then a penalty and a card would have been just. His action, though, had no bearing at all on the outcome of that particular move.

That's why I wish that referee Gerach had had the conviction to overrule his VAR, and to have added a reprimand along the lines of, "Why are you bothering me with this right now? We're in the middle of a game here. Where was the clear and obvious error? Could you pay attention to more serious matters?" Which brings us back once again to the problem of micro-refereeing that's been with us ever since the introduction of VAR, and which became particularly painful during this year's Women's World Cup.

"I think we've gone from clear and obvious to clear as mud," quipped the English TV commentator at Arsenal versus Crystal Palace on Sunday. A seemingly straightforward late goal from Arsenal defender Sokratis Papastathopolous looked like it had won Arsenal the game. The vigilant VAR, however, saw a slight push by Arsenal's Calum Chambers, even though Chambers also looked like he was being tripped at the same time. Referee Martin Atkinson had given the goal, but he was over-ruled. The game stayed at 2-2 until the end. 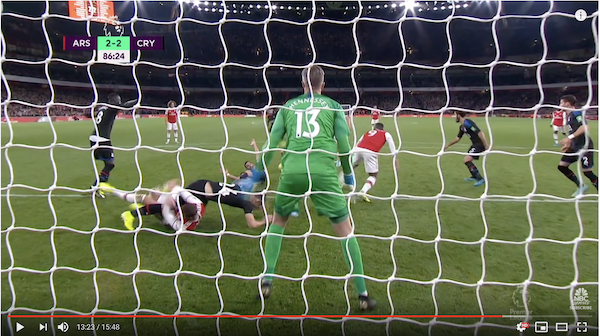 Earlier in the same game, Palace's Wilfried Zaha was shown a yellow card for diving in the penalty area. In this case, the VAR made the perfect intervention, because it was a clear and obvious error. Atkinson rescinded the caution and gave a penalty instead.

The problem is that VARs don't seem to understand the definition of clear and obvious. For everyone else, it's clear and obvious what we mean by clear and obvious, right? Something that the referees really should have seen, but -- because they are human beings -- they sometimes haven't. That should not, in my view, include microscopic offside decisions that can only be judged by computer-generated white lines. We should also not be having to tolerate situations where fans extensively celebrate what look like perfectly good winning goals, only to have them overturned on a piffling technicality.

If VARs can not be trusted to do their job any more than the center referee, I have a reactionary suggestion that contradicts my own previously held view that VAR could be good for the game. We should again allow the referee out on the field to be the sole judge, jury and executioner. Video technology claims to be about justice, but has instead become a vehicle to add another layer of spectacle, controversy and discussion for media and fans, to push the brand of soccer, raise the game's profile, create yet more 'stories,' and eventually just generate more cash.

Although, thank goodness, at least subs warming up behind the goal are now aware that they should not stick their foot out to stop the ball a quarter of an inch before it leaves the field of play ...