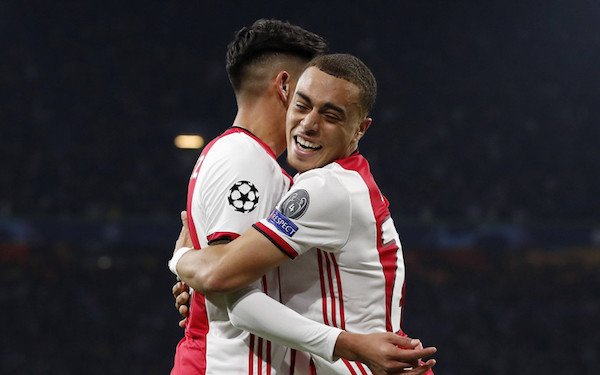 Sergino Dest, the 18-year-old Ajax right back, announced on Monday that he has committed his international future to the USA.

Dest started for the USA at the 2017 Under-17 World Cup and 2019 Under-20 World Cup and won a starting spot at Ajax this season. His rise at the reigning Dutch champion came less than a year after he signed a pro contract.

He debuted for the USA at the senior level in friendlies against Mexico and Uruguay in September but sat out the October matches against Cuba and Canada in the Concacaf Nations League in order to consider his international future. He would have been cap-tied to the USA if he played in either of the matches.

To play for the Netherlands, Dest would have been required to file a binding change of association with FIFA. In the last month, he met with Dutch national team coach Ronald Koeman, who said he had a future on the team.

There were several strong arguments for Dest to consider a switch:

-- A chance to play on one of the most famous national teams in Europe, a team that is on the rise after missing out on the 2018 World Cup;
-- A chance to play with players with whom he grew up with at Ajax; and
-- A reduction in his international travel.

But the fact that the USA first offered him a chance to play trumped everything.

"Of course, it was a tough decision for me when the Dutch men's national team showed their interest," Dest said, "but I have built up a very good feeling with Team USA over the last couple of years and I strongly believe in the plans and potential of U.S. Soccer."

The USA offered Dest a chance to play at the Under-17 World Cup after Dave van den Bergh, who was working as a U.S. staff coach, was tipped off that the Ajax academy had a young passport holder.

Dest was born in Almere to a Dutch mother and Surinamese-American father from Brooklyn and joined Ajax's academy program when he was 12.

Dest also played for the USA at the 2019 Under-20 World Cup in Poland, where it finished sixth. While he struggled defensively in the opening 2-1 loss to eventual champion Ukraine, Dest had an outstanding tournament in attack from his right-back position.

He was then fast-tracked into the Ajax first team, cutting short his summer vacation at the request of head coach Erik ten Hag.

For Ajax, Dest starts at right back though he is often tucked in as a midfielder. For the USA, he played at left back against Mexico and Uruguay. Right now, the USA is deeper at right back with DeAndre Yedlin and Reggie Cannon than at left back, where the top prospects are -- like Dest -- all teenagers.

"We are thrilled to have Sergino commit to our program," Berhalter said. "He is an exceptional young player with a bright future."