Most of the games I ref are under the U.S. Soccer umbrella, so official time is kept by the match referee. If time needs to be added, I announce, “A minimum of three minutes of stoppage time,” just as is done in professional games. I cannot remember the last time anybody has ever questioned when I ended the match.

Unfortunately, college and high school soccer use a different system with official time being kept on the scoreboard. The duties of the timekeeper take up more than one page in the college rulebook and a half-page in the high school rulebook.

I wrote about the various problems of this system four years ago and would like to revisit this issue and its glaring deficiency of ending the half when the ball is about to enter the goal. This rather dramatically happened to me in a game last week.

A Northeast Conference women’s game on Oct. 25 at Brooklyn Bridge Park with first-year women’s program St. Francis Brooklyn hosting Fairleigh Dickinson University (FDU): I was AR2, the assistant away from the benches with Bruno Mozzo as the ref and Albert Calise as AR1. We felt good as it was a well-officiated and well-controlled match, but then came controversy in the dying seconds of the game.

FDU was in the lead, 1-0, with St. Francis attacking toward the goal not in my half. As is the rule in college soccer, the PA announcer counts down the last 10 seconds of the half. When the announcer said “0,” a shot had been taken and it looked to me like the ball was a foot away from the goal line. I turned and looked at the small scoreboard at midfield that read 0.00, although I could not see the ball and the scoreboard simultaneously as they were 75 yards from one another.

AR1 Calise was by the goal line and had a clear, unobstructed view of the ball, he stood by the corner flag and confirmed that the ball was not over the line when the PA announcer said “0.” Ref Mozzo also did not believe the ball was over the line at zero. So all three of us had no goal. Unfortunately, none of us heard any horn to end the half.

We disallowed the goal because time had run out, and FDU wound up winning, 1-0. You can imagine that St. Francis felt hard done by. Bruno, Albert and I also felt rather lousy as we had a controversial ending because of the NCAA rule in having official time on the scoreboard. If this game had been played under the U.S. Soccer umbrella or anywhere else in the world, we would have waited for the shot to reach its conclusion and never end the game on a shot in mid-flight.

U.S. Soccer Hall of Famer Joe Machnik assigned this game and he watched it live from his home in South Carolina. He called Mozzo 10 minutes after the match ended.

Machnik explained, “Having official time on the scoreboard is long-standing, going way back to when soccer was being Americanized by the NCAA and others. Remember the kick-in instead of throw-in, semi-circular penalty area, etc.? Soccer is now America's game and we have embraced the international rules. Even MLS in its early days abandoned the shootout and official time being kept on a scoreboard clock.” 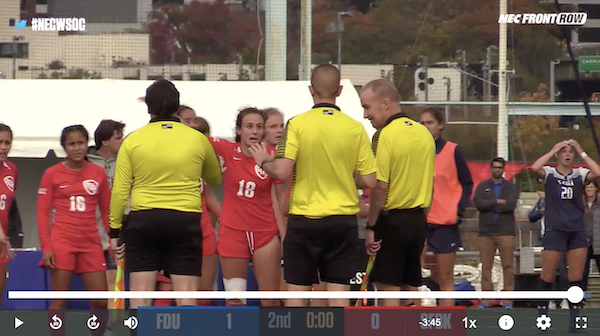 The officiating crew later watched the video on NEC Front Row with the disclaimer that the time at the bottom of the screen does not link directly to the scoreboard although the goal appears to be scored with time still left on the clock. With the volume pumped up to the max, you can hear the PA announcer count down the final seconds and he says “0” when the ball appears not to have entered the goal.

We’re talking about nanoseconds, which was the difference between St. Francis tying the game or not.

All this could be avoided in the future if the NCAA and high school soccer take the logical and extremely sensible step in giving the referee the official time and we would no longer have the ridiculous situation in stopping play as the ball is about to enter the net. And not put refs in the nearly impossible situation of determining if a goal is scored, or not, when the scoreboard and the goal are in two very different places as on most college and high school fields.

Time could still be kept on a scoreboard clock for cosmetic and other purposes. But referees should be allowed to announce a minimum amount of added time in each half depending upon how much time was wasted and this can be announced over the PA system.

“Unfortunately, time-wasting in soccer is prevalent. The NCAA does not recognize time-wasting during their many substitutions including re-entry,” Machnik said. “As such, NCAA playing time is generally less than the time played internationally. Yet, the ref cannot add time. Therefore, the spirit of the game is changed as time can expire before a legitimately earned corner kick or free kick is taken and the ref is in a ‘no-win’ situation whether or not to stop the clock. And even worse, time can expire with the ball about to cross the goal line as in this game.”