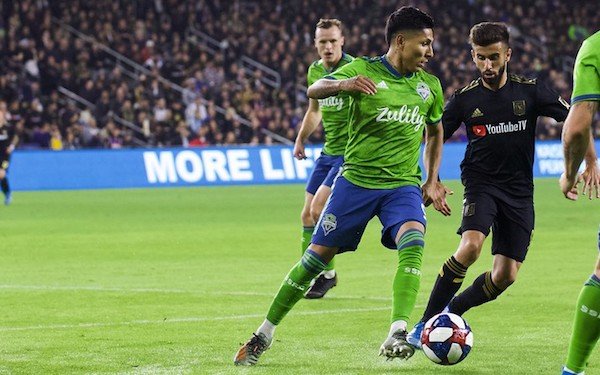 The excitement of LAFC's 5-3 win over the LA Galaxy last Thursday in the Western Conference semifinals was a distant memory as boos resounded from the Banc of California Stadium on Tuesday night.

LAFC fell to the Seattle Sounders, 3-1, and never looked like getting an equalizer after the Sounders went ahead 2-1 with a pair of goals four minutes apart midway through the first half.

That shouldn't take anything away from the play of the Sounders.

In one of the great individual performances in MLS playoff history, Peruvian Raul Ruidiaz scored twice and set up Nicolas Lodeiro for the winning goal.

Jordan Morris, Ruidiaz and Lodeiro created all kinds of problems for Bradley's defense that has now allowed three goals in each of LAFC's three playoff games in 2018 and 2019, all at home.

But it was Seattle game plan to push the LAFC attack to the outside and shut down its two young Uruguayan wingers, Diego Rossi and Brian Rodriguez, that frustrated the Supporters' Shield winners and left Carlos Vela, who finished the game with one shot, isolated.

“I think we had four shots on goal,” said Bradley. “They had numbers back, they clogged the middle, they defended in a compact and strong way and then, if you don’t move the ball quick enough, when you get up there it’s not easy to get shots.”

Seattle coach Brian Schmetzer said the game plan worked on both sides of the ball.

“We wanted to push LAFC into the areas where they were less effective,” he said. “So that was the entire game plan, to see if we could slow down their attack. On the attacking side, we knew we could create chances against this team. We knew we could. They take many risks when they defend, their counter-press, they take risks."

The Sounders came into the game as heavy underdogs, but they got a masterful performance from a veteran team that is heading to MLS Cup for the third time in four years.

Nine players who played on Thursday night are holdovers from MLS Cup 2017 and six played in MLS Cup 2016.

Seattle didn't score in either game -- it won MLS Cup 2016 in a shootout after scoreless draw -- but it didn't have Ruidiaz, who moved to MLS in July 2018.

Ruidiaz has scored six goals in five playoff games and gives the Sounders a threat that allows them to attack.

“We could have gone into a shell," Schmetzer said of the challenge faced by LAFC. "We could have sat back and accepted we would lose, but we didn’t.”