A 0-0 tie, how the USA's game with Japan ended at the Under-17 Men's World Cup in Brazil on Wednesday, sounds a lot better if you consider how the Americans started the tournament. That was a 4-1 loss to Senegal.

By getting a point against Japan, the USA knows it should advance to the knockout stage with a win over the Netherlands on Saturday. Since 2007, when the U-17 World Cup expanded to a 24-team format --  which sends four third-place group finishers to the second round -- four points have always been enough to reach the round of 16.

The prospect of needing to beat the Netherlands looked a lot more daunting before the tournament, which the Dutch entered as 2018 and 2019 U-17 European champions. But they arrived without their top striker, Jong Ajax's Brian Brobbey, because of injury, and followed up the Japan loss with a 3-1 loss to Senegal. 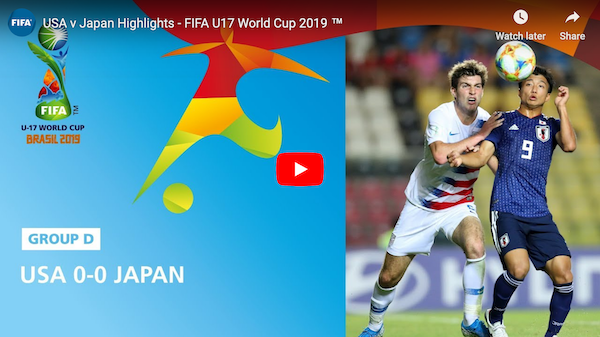 That by no means makes the USA the favorite against the Dutch, who did better against Senegal than the USA did. Both took an early lead, had more possession, and held the Africans at 1-1 up to the midway point before foundering. But the Dutch stayed even until the 87th minute while the USA was down 3-1 by the 76th and gave up a fourth in the 88th. But perhaps most concerning is how unpolished the USA looked against Japanese.

Stark differences. There was something delightful about watching how crisply the Japanese passed the ball, how they delivered it so precisely to each other. Quite often, what looked like a clearance landed perfectly at a teammate's feet. Even when they intercepted with headers, they usually directed the ball successfully to teammates. When the Japanese seemed exceedingly patient -- stroking passes to each other while the Americans chased and raced around to close gaps -- they exuded the confidence of a team in control.

The USA, although not awful, sent significantly more passes out of bounds or to the opponent. That contributed to the another stark difference between the two teams.

The Japanese frequently won the ball back right after an unsuccessful attack. Not only because of U.S. errors, but also by snatching the ball in one-on-ones. They looked the more efficient tacklers, while committing nine fouls to the 14 called on the USA, which reached nine by halftime.

The Americans sustained attack to some degree early in the game and for the first 15 minutes of the second half. For the last half hour, the Japanese owned the ball most of the time while the USA retreated. That cannot be attributed solely the tactic of playing for a tie -- although the USA aborted a stoppage-time attack in the midfield and passed all the way back to goalkeeper Chituru Odunze -- but also to inferior technique and the inability to link up. On a couple of occasions, with the ball at his feet, left back George Bello held his arms out beckoning teammates to make themselves available. Not that Bello was guiltless. He mis-trapped an easy ball so that it trickled out of bounds and sent passes to the foes -- like he did in the 80th minute after one of his gestures, as if he'd given up on finding teammates.

Bello at least created some danger going forward, without much help from midfielder Andres Jasson, whom Coach Raphael Wicky didn't sub until the 78th minute despite him providing some of the team's sloppiest play. On the other side of midfield, Ethan Dobbelaere also looked out of his depth and became more of a liability as the game progressed his misguided passes. (Wicky used only two subs.) Adam Saldana toiled defensively but failed to bring cohesion to a midfield whose standout player was Daniel Leyva, a defensive force and at times impressive on the ball, sparking some counterattacks.

Jasson and Dobbelaere were two of the five changes Wicky made from the first game, in addition to Odunze, central defender Nicolas Carrera and Bello.

Odunze's stop on Yamato Wakatsuki's header in the 74th minute was acrobatic and a game-saver. And tipping Wakatsuki's rocket over the bar two minutes into stoppage time is another reason why the 6-foot-7 keeper should remain the starter. The header he saved was the only close-range chance the Japanese had, which is a credit much to the play of central defenders Carrera and Kobe Hernandez-Foster, as well as Leyva.

Reyna's impact. Striker Ricardo Pepi saw little service and it was surprising that he didn't know how offside he was when he knocked home a rebound after keeper Zion Suzuki bobbled Jasson's shot. When Pepi turned his ankle in the 55th minute, Wicky finally inserted Gio Reyna. Unless Reyna had a fitness issue not revealed -- he certainly looked 100 percent -- it was a bewildering move to keep him on the bench that long. (Japan coach Yoshiro Moriyama also waited until the second half to bring in his No. 10, Jun Nishikawa, who's reportedly being courted by Barcelona.) Reyna may have had a poor game against Senegal, but surely his history indicates that was most likely an aberration.

Upon entering, Reyna immediately made an impact. He was certainly the player Japan struggled most to contain. His sly long-range free kick was a brief sign of innovation from the USA, even if it flew too high. With five minutes left, Reyna dribbled from the halfway line and by the time he squeezed through Japan's last defenders, found himself in the goal area, where Suzuki thwarted the best U.S. scoring chance.

In contrast to the self-assured Japanese players, the Americans often looked nervous, which perhaps contributed to the misplays. Nerves can't be an excuse come the third game, when the players and coach will have had two matches to find their bearings.

While so far not much indicates Wicky's team will impress at this tournament, recovering from a horrible first game for a decent chance to advance was a requisite first step.

TRIVIA. The USA has played to only one scoreless tie in its previous 61 games at the U-17 World Cup: the 0-0 against New Zealand at the Mexico-hosted 2011 tournament.