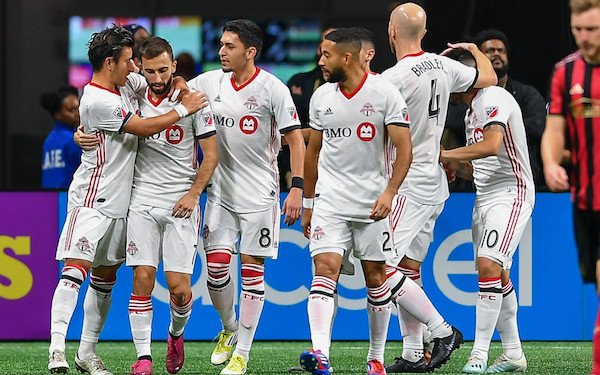 The Seattle Sounders were underdogs at LAFC and battled back after conceding an early goal and beat the Supporters' Shield champions, 3-1, in the Western Conference final.

Toronto FC was the underdog at Atlanta United and also rallied after falling behind early to defeat the defending MLS champion, 2-1, in the Eastern Conference final.

So much for the new playoff format rewarding the higher seeds for their regular-season performance with the home-field advantage.

The Sounders were deserving winners on Tuesday at the Banc of California Stadium. TFC's victory in front of 44,055 Atlanta fans at Mercedes-Benz Stadium was the bigger shocker because it was so outplayed.

The Reds fell behind to a goal by Julian Gressel in the fourth minute, and they could have folded after captain Michael Bradley took Pity Martinez down for a penalty kick seven minutes. But French-American keeper Quentin Westberg gave Toronto FC new life when he saved Josef Martinez's penalty kick.

Nicolas Benezet, a Frenchman who was acquired in mid-season on loan from Guingamp, tied it up in the 14th minute, and the match settled down.

It was actually all Atlanta United for much of the rest of the game -- it outshot Toronto, 18-4 -- but the Five Stripes' defense failed to collapse on sub Nick DeLeon, allowing him time to spin, set up at the edge of the penalty box and fire a shot into the Atlanta goal over Brad Guzan in the 78th minute.

Toronto FC then held off an Atlanta siege to return to MLS Cup against Seattle for the third time in four years.

The loss was hard for Atlanta United to swallow. Head coach Frank de Boer said he couldn't blame his players after controlling about 95 percent of the match.

"I spoke to the [Toronto FC] manager [Greg Vanney]," said de Boer "and he said they didn’t deserve the win, but they are in the final, and we are not. That’s harsh again. That’s sports, the beauty of sports and a part of life. We need to continue. We had a great season. We didn’t want it to end like this of course, but we can look back proudly at what we achieved."

De Boer compared Wednesday's game to the first conference final the night before.

"You saw it yesterday with LAFC, how hard it is to play against a very disciplined Seattle Sounders team," he said. "They [Seattle] played really great and they deserved to win. We had the control more than LAFC, I think we deserved it more. We had the chances. If we make it 2-0, then maybe the game can be over."

After beating top seed NYCFC on the narrow confines of Citi Field, Toronto FC struggled on the great expanse of Mercedes-Benz Stadium but did just enough to hold off Atlanta.

"I thought in the first half," Vanney said, "we were having a hard time finding our baseline shape and ended up doing a lot of chasing. I thought we did a good job of managing situations. I wouldn’t say it was perfect by any stretch, but we managed the situations as they came at us and kept ourselves in it and kept ourselves around it and we did that for large stretches of the game.”

Toronto FC's fouling slowed Atlanta United down on the counter.

"I think it is also a signal of how much these games mean," Vanney said. "When you play in a knockout round, and I think especially when you’re on the road, but it really should be for anyone. I mean, LAFC the other night doesn’t commit a foul and they give away a breakaway that leads to a goal or a counterattack. You have to use all of your resources, and sometimes a foul is a resource. It is not something that people love but the reality is it is a tool in the game that is there for you. You don’t want to do it in a way that you pick up a card and you definitely don’t want to hurt somebody, but it is a tool. If you feel exposed, then it is something that is there at your disposal."