U.S. Soccer's problems call for a CEO from the outside

The blame for the U.S. soccer world’s woes can be spread over many parties -- players, coaches, lawyers, etc.

But eventually, some of it has to go up to the top.

U.S. Soccer president Carlos Cordeiro didn’t start the war between the Development Academy and the ECNL. Chief commercial and strategy officer Jay Berhalter wasn’t responsible for the U.S. men’s complacent, uninspired performance in Toronto. (How much blame should go to another Berhalter is a separate question.) Neither man is responsible for the historical and cultural forces that made the United States a difficult place to run a soccer league or a federation. (There’s a book on that topic making the rounds right now.)

The status quo, though, has a few glaring flaws at all levels from youth to the national team, and many of the staffers who might have been able to fix such things have either left Soccer House or left anonymous comments that speak ill of the federation. Longtime CEO Dan Flynn has successfully harnessed national team successes and a general rising interest in soccer to a much stronger financial base than the federation had 20 years ago, but in the wake of his departure, U.S. Soccer has problems with staff, youth development and public image.

That’s why the next CEO of U.S. Soccer has to come from outside.

It’s not simply a question of the optics of elevating Jay Berhalter to the CEO position while his brother is the men’s national team coach. It’s not even a question of all the anonymous fingers pointing at Berhalter as the source of many of the federation’s ills. It’s simply time to get an outside voice. 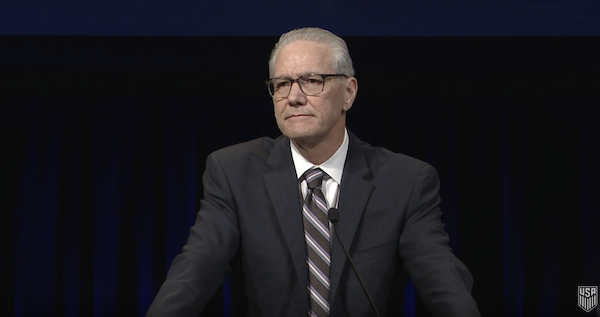 Dan Flynn, who announced his retirement in February, left his post as U.S. Soccer as CEO in September.

Perhaps U.S. Soccer’s board realizes the problems, and that’s why Berhalter hasn’t simply been promoted. If you serve a long time as the top executive’s right-hand man, and everyone knows that top executive is about to retire, you’d think the decision would come quickly. But discontent with Berhalter is evident, and the Washington Post’s Steven Goff reported in June that Cordeiro was hesitating to make that hire.

Another longtime executive, Brian Remedi, is more or less in charge on an interim basis since Flynn’s long-expected retirement. But U.S. Soccer hasn’t given him the job, either.

Finding an outside person might not be easy. Grant Wahl reported in September that the rash of lawsuits has had a chilling effect on finding good candidates. Again, some of the blame here goes to lawyers -- a couple of these cases are flimsy. But some aren’t.

That’s hardly the only problem the fed faces. A youth task force -- desperately needed to address the stagnant participation numbers, spiraling costs and sputtering development pipeline (boys and girls) -- has been diversity-challenged, though it’s starting to make some progress and may soon roll out some recommendations. The lower divisions of professional soccer are still going through some upheaval, though that might not be solved until the NASL’s lawsuit winds its way through court sometime in the 2020s. Rollouts of coaching and referee education programs have had a few hiccups and technical issues.

The good news is that the finances are in good shape, thanks in large part to the Copa America Centenario and Flynn’s conservative budgets over the years. (No, they’re not solely the result of the U.S. women’s national team winning two straight World Cups. Check the 990 forms.)

Some of U.S. Soccer’s problems can be ameliorated by throwing money at them. The federation would surely avoid paying the full freight of the women’s team’s back-pay demands if they go to court, but coming up with a number to make the suit go away would solve a lot of problems. They can always use more scouts and regional outreach programs.

But it’s also important to understand the CEO’s job. The CEO must have the economic background to work through budgets, and she or he must have the managerial skills to deal with programs ranging from referee and coaching education to the new women’s beach soccer team. We’re not talking about a coach here.

And in the long run, the public focus on the national team pay might backfire. I’ve found no evidence that either national team is underpaid in comparison to other countries. (Players associations are welcome to provide it.) A typical successful federation is more likely to funnel its prize money and national team revenue back into development. Once the Centenario surplus dwindles, the federation will still need to spend more on the next generation and growing the game in general. We’re not going to miss the next Christian Pulisic or Rose Lavelle because the current Pulisic and Lavelle are making a few thousand less than they’d like on their six-figure paychecks. How many Pulisics and Lavelles are we missing because we have inadequate scouting and a chaotic, expensive youth soccer system?

So the new CEO may need to be more flexible than Flynn, Berhalter and former president Sunil Gulati have been -- many of the inequities in men’s and women’s pay fall at their feet and could have been easily avoided -- without spending the surplus all in one place.

A new hire won’t please everyone. Major League Soccer general managers probably have the resumes, but the Soccer United Marketing conspiracy theorists won’t like that. Some state federation managers may also have applicable experience, but they’ll be accused of being insiders. An outsider may be accused of not being a “soccer person.”

We can only hope U.S. Soccer is talking to a wide range of candidates, including women and people of color. (Worth noting: In the past two years, the federation has added two people of color to upper management -- Cordeiro and Earnie Stewart. That’s not enough to excuse the federation from looking for a diverse group for its most crucial hire in years -- yes, even more crucial than Gregg Berhalter or Vlatko Andonovski.)

And if U.S. Soccer has dragged its feet on the CEO search this long without talking to qualified candidates from outside -- which we don't know -- what does that tell you about the state of the fed?

u.s. soccer
12 comments about "U.S. Soccer's problems call for a CEO from the outside".
Read more comments >
Next story loading