Raphael Wicky's first experience with coaching young Americans came when U.S. Soccer hired the Swiss earlier this year to lead the USA's U-17s. It did not go well. 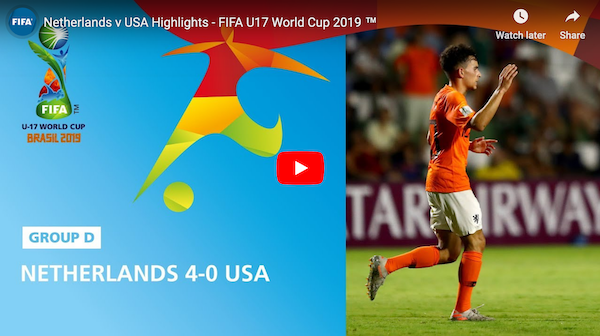 Losing 4-0 to the Netherlands in its final group game -- after a 4-1 loss to Senegal and a 0-0 tie to Japan -- ranks his team's performance with the worst of the USA's 17 appearances at the biennial world championship:

Two years ago, the John Hackworth-coached U-17s reached the quarterfinals in India. This U-17 World Cup is the first world championship since Hackworth and the other six YNT head coaches who had been in place before Carlos Cordeiro replaced Sunil Gulati as U.S. Soccer president departed. The seven included Shaun Tsakiris and Dave van den Bergh. Tsakiris was the U-16 coach and Hackworth's assistant. Van den Bergh coached this cycle of players at U-15s and coached them as U-17s after Tsakiris' departure followed Hackworth's.

So Wicky, who was able accommodate the new U.S Soccer policy forcing coaches to relocate to Chicago, became these players' fourth coach -- seven months before the World Cup. Wicky, for whom moving to the USA was especially enticing because he had married an American, is currently the only full-time youth national team head coach employed by U.S. Soccer.

For sure, the draw compounded Wicky's challenge. Japan and the Netherlands are Asian and European champions. And Senegal, although it qualified only because Guinea was thrown out for using overage players, undeniably arrived with some exceptionally talented players.

But Wicky had the benefit of more players who had already started pro careers than any U.S. U-17 team in history. Yet on Saturday against the Dutch, even the USA's most experienced and usually impressive players looked off their game and uninspired. Gio Reyna, who's played first-team friendlies with Borussia Dortmund, showed frustration early on when he wasn't getting the ball. Then he fumbled it when he had chances to pull the trigger. Based on this game, you'd had never imagined that Gianluca Busio has played nearly 30 MLS games for Sporting Kansas City. Left back George Bello, who's debuted for Atlanta United, made two promising forays in the first half, and that was pretty much it. Midfielder Daniel Leyva usually defends well and knows how to handle the ball when he gets it. He looked pretty sharp against Japan but in this must-win group finale his savvy disappeared.

Such performances by those players against the Dutch and the overall incohesive play in all three games point to coaching deficiencies.

Tactically, coaches like the cliche of getting their players on the same page. Wicky didn't get these guys in the same book. He had them playing conservative soccer yet they still got spanked by the Dutch.

Yes, after American failures in international competition there comes scrutiny of the players' talent. We'll see later what becomes of the boys. But so much wouldn't have gone wrong if U.S. Soccer had given them the benefit of coaching continuity and a staff familiar with taking U.S. kids to a world championship, the way things worked when Tab Ramos was still in charge of the youth national team program. Tsakiris, for example, served as Hackworth's assistant at the 2017 U-17 World Cup.  During Ramos' era, his staff -- the full-time guys and ones who came in for assistant coaching stints -- included several with youth world championship experience. They also had familiarity with American culture and the international game. Tsakiris, like Ramos, also played in a U-20 World Cup for the USA. Van den Bergh worked in U.S. youth soccer after retiring from MLS, played in a U-20 World Cup for the Netherlands, and served as a U.S. U-20 World Cup assistant.

And the youth national program had been on track, making obvious progress under Ramos' guidance. But U.S. Soccer dismantled it and took only one action to reconstruct it: hiring a coach from a nation with an unimpressive soccer history who had zero experience in American youth soccer.

The players deserved to be put into a more likely position succeed. The ones with true talent will overcome. Failure at a tournament for teenagers doesn't reliably measure a nation's entire national team program. But when your U-17s are playing as dismally uninspired soccer as your full national team, and the only full-time coach its YNT program employs is one who failed monumentally ...  That's a crisis.

mls, youth
49 comments about "Under-17 World Cup ends in debacle for USA and its Swiss coach".
Read more comments >
Next story loading