From Dijon to Valencia to Frankfurt -- a different measure of success

It's a well-worn complaint that top-heavy wealth means Europe's biggest leagues have become predictable to the point of tedium. I make this observation almost every week, and frankly I'm sick of hearing and reading myself say and write the same thing. So defeats this weekend for Paris Saint-Germain, Barcelona and Bayern Munich made it an exceptional few days of soccer, especially given that these Champions League perennials lost to clubs well below their station. 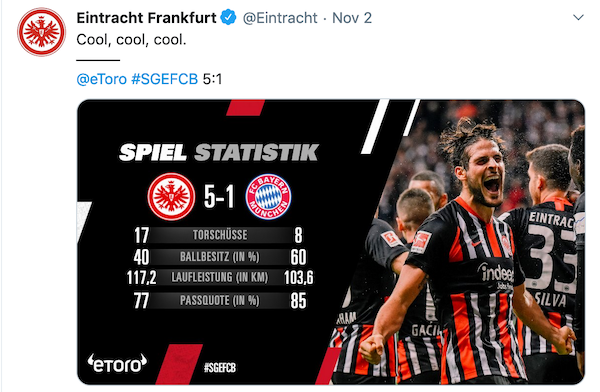 PSG went down 2-1 at Dijon -- that is, first place lost to last. Barcelona came away from mid-table Levante smarting from a 3-1 reverse. And German champion for the last seven seasons, Bayern Munich, lost 5-1 to an Eintracht Frankfurt team who hadn't beaten them in league play for nine years. Coach Nico Kovac was fired the next day. The last time Bayern lost this heavily was to Wolfsburg in 2009, an identical result that prompted the firing of a coach you may have heard of, Jurgen Klinsmann.

While Paris is still six points clear at the top of La Ligue, there's an unfamiliar look to both the German and Spanish top flights. In the Bundesliga, Bayern is fourth, and only two points separate Dortmund in second from Hoffenheim in ninth. There are no outstanding teams, and despite their three-point lead, first-place Borussia Mönchengladbach is not, as their defender Mathias Ginter put it, "ear-marking any dates in the calendar yet for a championship celebration."

La Liga is even tighter, with just five points separating Barcelona and Real Madrid at the top from Valencia in 13th. Real could only tie at home 0-0 to Betis, which is just above the relegation zone. Despite their massive wealth, these clubs are labeled by various media as being in a state of "crisis" for not doing what they are supposed to do -- win decisively every week, particularly when playing unfashionable clubs.

It's probably no more than a momentary blip in soccer's established order. Liverpool and Manchester City are again strong and dominant in England, although Leicester City is suddenly trying to prove that its 2016 Premier League title wasn't a completely freak one-off. Juventus and Inter Milan are way ahead of the field in Serie A. Their respective league executives are probably just happy to have a two-horse race on their hands.

I was going to mention Manchester United's 1-0 loss at Bournemouth, but that no longer qualifies as a shock result. After two decades of bossing English club soccer, United's decline over the past six years has fostered the feeling that monoliths can be moved after all. That at some point soon the era of Lionel Messi and Cristiano Ronaldo will be over, and that maybe we could see some entirely new names threatening to reach the latter stages of the Champions League. That an extended slump in form for Bayern and Real, for example, would be a very good thing for both their domestic leagues and international competition, and for the health of the game in general.

Failure on the field is critical for all those teams that have focused their business plans on a transcontinental model, declared themselves too big for the communities that made them, and courted faraway fans for the sole purpose of bilking them out of their bucks. That's why losing a few games of soccer is suddenly called a crisis -- it's not the loss of points, as such, but how the loss of points might translate into a loss of revenue. This in turn could mean losing the race to sign the next brand-enhancing, replica shirt-shifting household name.

When you turn a sport into a business, you shift the definition of success, and even a short-term slump leads to deathly, morose faces, like the ones worn by Bayern bosses Karl-Heinz Rummenigge and Uli Hoeness on Saturday afternoon in Frankfurt. For those fans not invested in the performance -- financial or otherwise -- of teams who deem themselves too big to fail, such darkly comical shots can be all we have to sustain us through another nine years of, say, failing to beat Bayern Munich. In between, Bayern will likely win again, multiple times.

They will not, though, remember those wins in the same way that Eintracht fans will look back on Saturday's 5-1 walkover. When success-bloated clubs talk about tradition, it comes across as a banal marketing cliché to a background of excess silverware. Meanwhile, for fans of Dijon, Levante and Eintracht, the weekend's games are now anchored in their respective histories to be talked about, commemorated, and revered for decades to come. It's an entirely different measure of success, but one that's immensely more gratifying for the teams that experience it.