MLS Cup: Jozy Altidore is hoping for a miracle 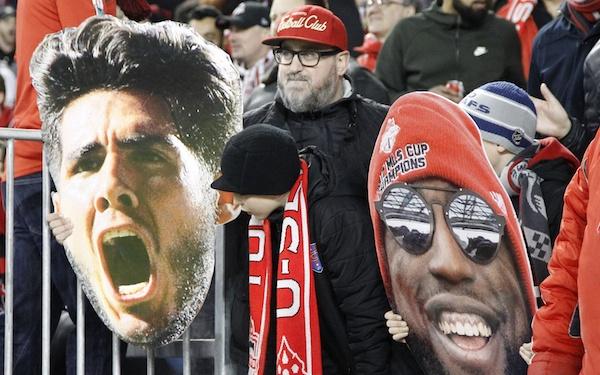 Jozy Altidore, who was MLS Cup 2017 MVP when Toronto FC beat the Seattle Sounders, 2-0, and re-signed a Designated Player contract through 2022, says it's doubtful he will be ready to play in Sunday's final against the Sounders.


The U.S. international suffered a quad injury in TFC’s 1-0 win over Columbus in their regular-season finale and has missed all three playoff games.

“It’s been a while," he said on Monday. "At this point, it will take a little bit of a miracle to be out there on Sunday, but that’s where I am. I’ve just got to keep trying to get myself there. It’s just time. Time is not on your side.”

Altidore scored 11 goals in 22 games in 2019 to give him 56 goals in 110 regular-season matches since arriving in 2015. He is also TFC's all-time leading scorer in the playoffs with seven goals in 11 games.

Head coach Greg Vanney remained hopeful that Altidore will be able to resume training with the rest of the Toronto FC team ahead of its flight to Seattle on Thursday.

“We hope, within the next few days,” he said on Sunday. “We’ve got eight more days to get him going. The more fitness and high-speed running that we can get him, the more prepared he’ll be. We can push back striking for a few more days.”

“Really, it’s about his physical fitness, his health, and his ability to sprint,” he said. “As a forward you’ve got to be able to make that game-changing moment. The better fitness we can give him, the more minutes he’ll be capable of playing. That’s what we’re focusing on right now. We hope by middle of the week – Tuesday, Wednesday – he will be back fully.”

It should be noted that TFC has done fine without the burly forward. It beat D.C. United, 5-1, in overtime in Round One, then took to the road and knocked off both No. 1 seed NYCFC and No. 2 seed Atlanta United, the defending champion, 2-1.
mls
Next story loading