LA Galaxy II's Junior Gonzalez to fill in as head coach at U.S. U-17 camp

Two U.S. youth national teams will be part of a four-team tournament Nov. 9-19 in Lakewood Ranch, Florida. Junior Gonzalez, the interim coach of LA Galaxy II of the USL Championship, will serve as head coach of a team of 2002s, comprised of U-17 players who weren't part of the USA's 2019 U-17 World Cup roster. Gonzalez, and assistant coaches Chris Martinez and Eric Quill, were brought to fill in for U-17 coach Raphael Wicky  and his staff, whom U.S. Soccer had hoped would be occupied with the U.S. U-17s in Brazil. However, they exited in the first round. 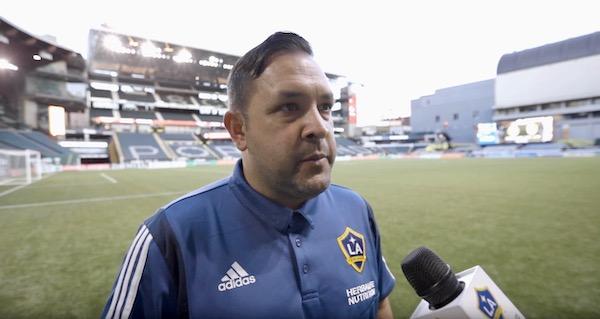 The U.S. U-16s will be coached by Larry Sunderland and assisted by Cristiano Scopolo. Chris Sharpe and Josh Ford will be goalkeeper coaches of the U-17s and U-16s, respectively. They will face the Netherlands and Turkey.

A U.S. Soccer spokesman said the use of a coaching staff different from Wicky and his crew for the Florida tournament does not indicate that Wicky, the Swiss who was hired in March, will be leaving his post.

Gonzalez, a Southern California product whose playing career included winning the 1997 NCAA title with UCLA under Coach Sigi Schmid, replaced Mike Munoz as Galaxy II head coach in July. Gonzalez initially joined the Galaxy in November of 2017 after serving as head coach of the USL's Rio Grande Valley FC Toros. He also coached in the Seattle Sounders academy, was a Sounders FC S2 assistant, and was a head coach of UC Riverside. In 2013 he served as Chivas USA assistant coach. His previous work with U.S. Soccer included assisting with U-15s and serving as scout at the 2015 U-17 World Cup in Chile.

Quill guided FC Dallas affiliate North Texas SC to 2019 USL League One title in October and Texans SC Houston to the 2017 Development Academy U-17/18 national championship title. Quill had served as Dave van den Bergh's assistant with the U.S. U-15s and with the U-17s when Van den Bergh headed the U-17s in the wake of the departures of John Hackworth and Shaun Tsakiris, before the hiring of Wicky.

Sunderland, the Portland Timbers Academy Technical Director, coached the U.S. U-16s in March at a tournament in the Czech Republic and at a September camp in Southern California. He was assisted at both events by Scapolo, who has worked in the LAFC academy.

Sharpe, an Australia native, is the Colorado Rapids' assistant and goalkeeper coach, and academy goalkeeper director.

The coaches are working on a per diem basis for U.S. Soccer, for whom Wicky is the only full-time youth national team coach. U.S. Soccer is expected to release the U.S. rosters on Thursday.