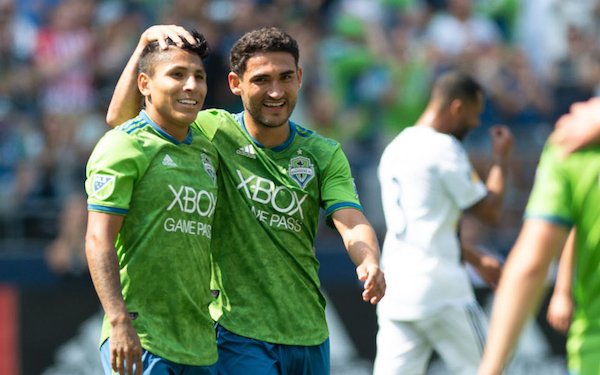 Since their launch in 2009, the Seattle Sounders have thrived on having go-to goal-scorers.

Fredy Montero in the early years. Obafemi Martins and Clint Dempsey after they arrived in 2013.

Dempsey retired last August. But by then, Seattle had found a replacement: Peruvian Raul Ruidiaz.

Ruidiaz was one of the most expensive Designated Player signings in MLS history -- a package of $14 million for his transfer fee from Mexico's Morelia after the 2018 World Cup and salary -- and he has certainly delivered, leading the Sounders to Sunday's MLS Cup matchup with Toronto FC.

The 29-year-old forward has scored 21 goals in 36 regular-season games and already has six goals in the playoffs, tied for second in Seattle history.

His performance with two goals and an assist in the 3-1 win at Supporters' Shield champion LAFC in the Western Conference final is one of the best single-game performances in MLS playoff history.

“[He is] worth every cent we paid for him,” said Sounders coach Brian Schmetzer after the match.

Ruidiaz is only 5-foot-7 but he is quick and he is strong, which makes it very difficult for a defender to handle him on artificial surface, like at the Sounders' home, CenturyLink Field.

If you were to rank MLS's top strikers, Ruidiaz's name doesn't quickly come to mind, but he is similar in terms of his makeup to Atlanta United's Josef Martinez.

“He is an assassin," said Toronto FC coach Greg Vanney ahead of MLS Cup. "He just finds little pockets, spaces. He will continue to work for them. He reminds me a bit of Josef Martinez — he is a striker’s striker. He is playing for his moments. He’s very clever about manufacturing those moments and finding them. And when he gets them he is very efficient about how he goes about it."

The Seattle attack isn't just about Ruidiaz. The Sounders cause all kinds of problems for opponents with Jordan Morris and Brad Smith overloading the left side.

But it is the partnership of Ruidiaz cutting in between defenders and Nicolas Lodeiro lerking behind him that has been so effective.

“Obviously, he has a good supporting cast helping him," said Vanney. "Especially with Lodeiro, who drifts all around the field. You’re trying to take care of him and not allow him to be the provider. It’s something we have to take care of.”

Ruidiaz and Lodeiro combined on all three goals against LAFC and have five goals and eight assists between them in three playoff games.