As one should expect, the world champions easily beat Costa Rica on Sunday. In the USA's last game of 2019, and second game under new head coach Vlatko Andonovski after Thursday's 3-2 win over Sweden, two goals within 10 minutes of kickoff set the USA on the path to a 6-0 win. The Ticas did manage to hit the crossbar twice in the second half, but generally played like a group hoping to avoid a mega-rout. The big winner was 26-year-old North Carolina Courage forward Lynn Williams, who came off the bench at halftime and scored twice. Williams, making her 21st appearance, had not been a part of the team at the 2019 World Cup nor the qualifying tournament. Andonovski also gave two players their debuts. 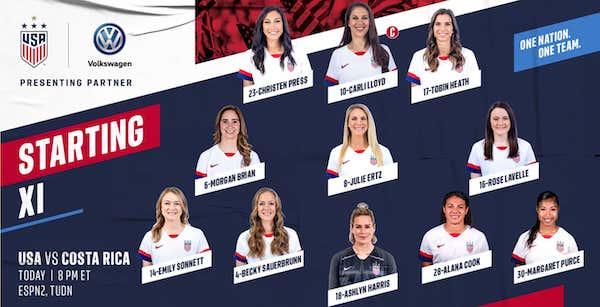 GOALKEEPER
Ashlyn Harris saved a header that went straight to her and easily caught a cross during a 45-minute appearance. She was replaced by Adrianna Franch at halftime.

DEFENDERS
Two defenders made their USA debuts, right back Margaret Purce and central defender Alana Cook. Purce attacked well down the right wing, and her strike in the 86th minute after unfazed by Lixy Rodriguez's sloppy tackle from behind turned into an own goal to make it 6-0. She wasn't tested much defensively. Cook caught up with Priscilla Chinchilla and prevented a breakaway scoring chance with her clean tackle. At left back, Emily Sonnett got bolder coming forward as game progressed, wisely taking advantage of Costa Rica's decision not to attack down the wings, and her cross helped set up the 5-0 goal. Veteran Becky Sauerbrunn held the other center back spot until making way for Andi Sullivan at halftime, when Julie Ertz moved from midfield to the backline.

MIDFIELDERS
Rose Lavelle orchestrated the USA's excellent start, assisting on the first two goals. Morgan Brian looked wonderfully composed as she stroked the ball into the side-netting to make it 2-0. Julie Ertz, generally in charge ensuring no midfield rhythm by the opponent, surged forward at the right times, such as on that Brian goal.

FORWARDS
Carli Lloyd timed her run perfectly to remain onside and finished with a strike on the first touch to open the scoring as crowd was still settling in. Christen Press shot high on a prime chance in the first half and struck the post on a close-range sitter -- seconds before converting a left-footed shot from 11 yards after faking out Katherine Alvarado to make it 4-0. Tobin Heath certainly troubled the Costa Rican defense but her touch looked off at times and she failed to to pull the trigger at the right moments. But she passed perfectly to Williams on the third goal.

SUBSTITUTES
Adrianna Franch tipped Chinchilla's shot onto the crossbar in the 77th minute to preserve the U.S. shot and left her box a few minutes later to intercept a through ball. Lynn Williams' combination of speed, two smart touches to evade two defenders, and a crisp low shot provided the early second-half goal that extinguished any hope the Ticas may have had to keep it close. She nicely nailed a half-volley to make it 5-0. That goal was set up by a header from Jessica McDonald from the Sonnett cross. One continues to worry about Mallory Pugh's progress. She entered at a time when an attacker should have been able to torment the Tica defense, but failed to do so. When her dribbling did succeed, she followed with an inaccurate pass.

TRIVIA: Margaret Purce is the first Harvard alum to appear for the U.S. women's national team.