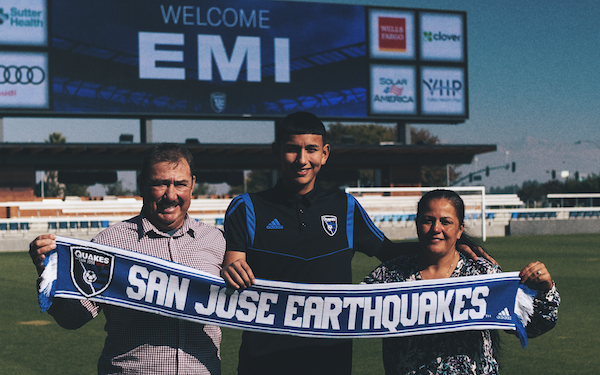 The San Jose Earthquakes made 14-year-old goalkeeper Emi Ochoa the second youngest signing in MLS history, 23 days older than Freddy Adu was when he signed.

Ochoa is the youngest to sign a Homegrown Player contract and one of five Homegrown players on the Earthquakes roster currently under 18 years of age, joining Jacob Akanyirige (17), Gilbert Fuentes (17), Casey Walls (16) and Cade Cowell (16).

“The work we have done to prepare ourselves for the future at the goalkeeping position gave us an opportunity to offer a contract to Emi, even at his young age,” said Earthquakes general manager Jesse Fioranelli. “We have established players we are going to lean on for 2020 and the years to come, which will allow Emi to develop at his own pace with achievable goals year over year, including ones from an academic and life perspective.

Ochoa, native of Salinas, Calif., began his youth career at his hometown club El Camino FC before joining the Santa Cruz Breakers Academy and later the Quakes Academy. The high school freshman has previously represented the USA at the U-14 and U-15 levels.


The  is currently rated by Top Drawer Socceras the nation’s No. 1 goalkeeper for the Class of 2023. He is the first teenage goalkeeper to sign a professional contract with the Earthquakes.