Sam Kerr: 'I feel Chelsea have been building something special' 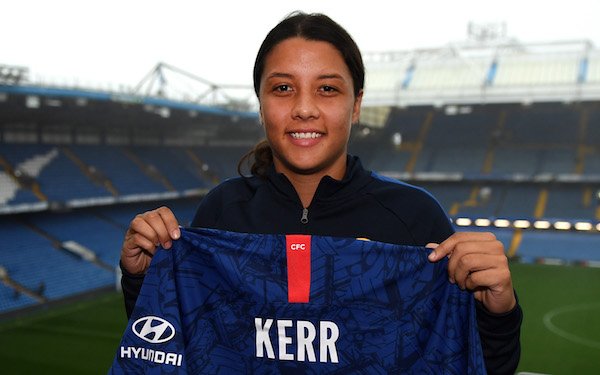 The 26-year-old international signed a two-and-a-half year deal and will join the Blues for the second half of the 2019/20 Barclays Women’s Super League season when the mid-season transfer window opens.

Kerr split time between clubs in the NWSL -- Western New York Flash, Sky Blue FC and Chicago -- and Perth Glory in the Australian W-League. She won the NWSL scoring title the last three seasons and was the MVP in 2017 and 2019.

"The WSL is the best league in Europe," she said. "I want team success and I don’t want it to come easy. I feel Chelsea have been building something special over the years and I want to be a part of that – I want to lift some trophies.’

Kerr is all-time leading scorer in the NWSL with 69 goals as well as in the W-League with 70 goals. She debuted for the Australia's Matildas at 15 and has scored 38 international goals, including five goals at this year’s World Cup.

The English press characterized Kerr's signing as the start of an arms race for international women's talent.

"The fact she chose Chelsea when she could have gone to any club in the world is a testament to the players and the staff here," said Chelsea manager Emma Hayes, "because she saw this is the best place for her to grow and take the next step in her career. That’s a wonderful compliment to us all."